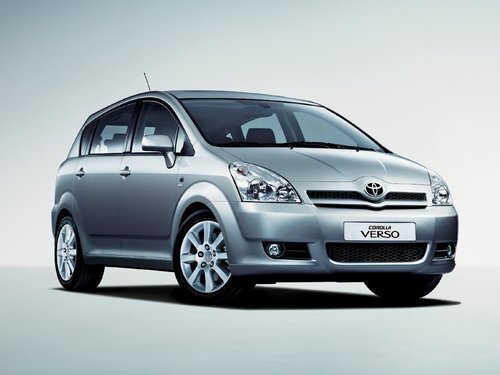 Van
Designed for the European market, the Toyota Corolla Verso minivan was developed in Europe and manufactured in Turkey. At the heart of its design is the Toyota Corolla hatchback platform. Compared with it, only the wheelbase remained unchanged, and all overall dimensions grew noticeably: length - 180 mm, width - 75 mm and height - 155 mm. The car has a very dynamic appearance and, with the inherent ingenuity of the Japanese, offers its original solution to the layout of a fairly compact, but roomy interior. Toyota Corolla Verso used the Flat-7 interior transformation system. The rear seats not only disappear into the floor, leaving a completely flat plane for the load. The head restraints of a pair of rear seats move forward and down, and the clever mechanism pulls the pillows into a secluded place. In one go! The middle row seats move forward, the backs are tilted (for passage to the rear seats), shifted (making room for legs), recline or fold forward. Easy Flat-7 offers thirty seat options. In this case, the folded chairs form a perfectly flat plane.
In the Russian market, Toyota Corolla Verso was offered only in a seven-seater version and in two trim levels: Terra and Sol. The Terra version is equipped with electric drive and heated side mirrors, a radio with a CD player, front electric windows. The Sol version is additionally equipped with climate control, a full range of power windows, xenon headlights, fog lights, cruise control, roof rails, and a leather steering wheel braid. The luggage compartment of the Corolla Verso can vary from 91 to 779 liters. And what a scope for luggage when all the seats are folded: 1980 mm long and 1370 mm wide! The driver’s seat is also conveniently organized - adjusting the height of the front seats, the departure and tilt of the steering wheel.

For Russian buyers purchasing this car from an authorized dealer, there was no problem choosing an engine - the car was offered only with one 1.8-liter 1ZZ-FE engine. Belonging to the mass series, this engine with 16 valves, two overhead camshafts (DOHC) and chain drive is among the widespread and well-studied in technical terms, which eliminates any problems with its maintenance and repair. At the same time, the engine demonstrates quite good performance - maximum power of 129 hp. (6000 rpm), maximum torque 172 Nm (4200 rpm. )

The front suspension of the Corolla Verso is a MacPherson strut with anti-roll bar. Rear - torsion beam with anti-roll bar. At the base, the car is equipped with 205/55 R16 tires, disc brakes on the wheels of both axles (front ventilated), the diameter of the front discs is 295 mm, the rear discs are 290 mm.

Corolla Verso is an excellent example of a compact minivan of increased capacity, although, of course, its seven-seater saloon is difficult to recognize as full due to the minimally allocated seat for third-row passengers. And yet, the principle of universality itself is perfectly implemented in this model, which can be considered as a competitor to cars such as Renault Scenic and Opel Zafira. In general, Corolla Verso demonstrate high quality and reliability, although the choice of a car with a robotic gearbox, which did not escape some of the "childhood illnesses", should be more demanding.