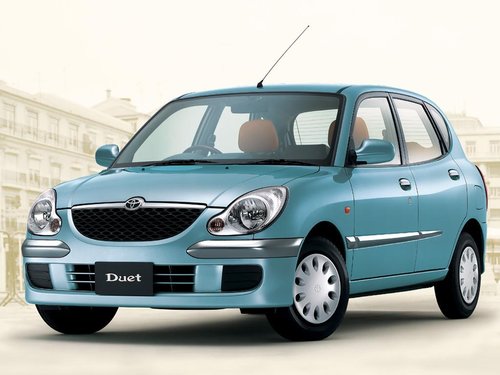 Electrics
Hatchback
At the end of 2001, the appearance of the model underwent dramatic changes. Duet installed headlights in the form of merging drops of water and a radiator grille in the style of Toyota Verossa. The car received new larger taillights and a new rear bumper. The all-new front panel in the cabin seemed to migrate to the hatchback from a higher-class car. Changes in technology include the appearance of two versions with a 1.3-liter engine - a standard capacity of 110 liters. with. and more economical 90-horsepower. In the basic version, the car was still sold with a 1.0-liter 3-cylinder EJ-VE engine (64 hp).
After the second restyling, the Toyota Duet hatchback got a very functional dashboard, which in its convenience and high-quality perception became much better. In combination with a 110-horsepower engine, Duet was now offered only in a single, top-of-the-range configuration 1. 3 S, in which I received a package of external styling with aerodynamic parts (front and rear spoilers, door sills), alloy wheels 14 inches, white “tidy” and leather-covered three-spoke steering wheel, Recaro bucket sports seats, and the center console trim is made of metal. The classic approach to luxury was distinguished by the 1.0X and 1.3X trim levels - a center console trim in wood, a steering wheel with natural wood inserts, chrome mirrors, a 2DIN format CD system, a new intelligent keyless entry and start system. Toyota Duet since December 2001 was equipped with three options for power units. The base is still a 3-cylinder 1.0-liter DOHC - an EJ-VE engine with variable valve timing, which power was 64 hp and a torque of 94 Nm. Models with 1.3-liter engines were offered in two versions: modifications that run on regular gasoline (AI-92, AI-95) and have a capacity of 90 liters. with. (124 Nm), as well as versions “sharpened” for premium gasoline (AI-98), with a return of 110 “forces” (126 Nm). Regardless of the performance, the Toyota Duet was offered either with a mechanical 5-speed or automatic 4-speed gearbox. In both versions, four-wheel drive was available.

The hatchback is equipped with independent front suspension and rear semi-dependent on front-wheel drive cars or dependent on all-wheel drive. Toyota Duet has disc brakes at the front and drum brakes on the rear axle, and a power steering is installed. With a body length of 3.66 meters, the hatchback has a width of 1.6 m and a height of 1.45 m, and its front and rear overhangs are relatively small. Maneuverability is excellent - a turning radius of 4.3 meters. For the Duet issue since December 2001, the manufacturer indicates a slightly larger cabin length - 1745 mm compared to the previous 1725 mm. Width and height have not changed: 1330 x 1165 mm. The rear three-seater seat is divided asymmetrically, but in the basic configuration, the back folds up as a whole.

Toyota Duet was considered advanced in terms of safety. The body was developed using new technologies, with an increased content of high-strength steels and was equipped with built-in deformation zones, stiffening amplifiers in the doors. As standard equipment, all Duet 2001-2004 models were equipped with two airbags, an anti-lock braking system with EBD and an auxiliary braking system, seat belts with a force limiter, and child seats. The emergency protection system included the function of unlocking locks and stopping fuel supply in the event of a collision, and the automatic inclusion of a light alarm. The list of available options also included side airbags and the VSC stability control system.

Having very favorable body dimensions in terms of maneuvering, the Toyota Duet, like its copy of the Daihatsu Storia, has an increased wheelbase, a cozy cabin, and a very practical luggage compartment. The hatchback has a simple and unpretentious suspension, good ground clearance. Duet is considered to be very economical, but the power of the 3-cylinder unit may not be enough on suburban roads (especially in the combination of “automatic” and 4WD), so it makes sense to pay attention to the 1.3-liter versions, which have not only increased power, but also resource. It is believed that the shape of the front grille, which appeared on the car after the modification of the lineup in 2001, completely “smeared” all the advantages of the external design. However, there are opposing opinions on this score. Daihatsu Storia / Toyota Duet was replaced in 2004 by Boon / Passo models.