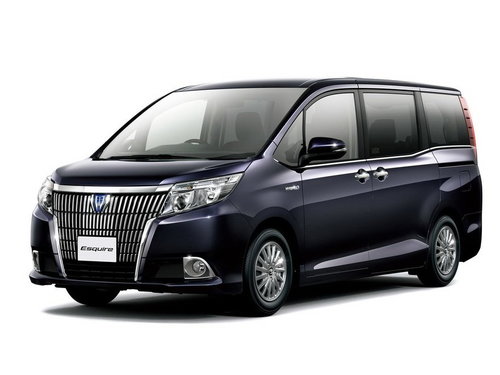 Electrics
Van
Toyota Esquire minivan is based on the third generation Noah / Voxy. Technically, all three models are identical, Esquire differs from its relatives in an improved level of equipment and finishes. Outwardly, the difference immediately catches the eye: the Esquire is marked by a massive T-shaped chrome grille, crowned with its own emblem with the letters ESq, stylized as an image of a knight's shield and sword. Among the less noticeable decorations: steel window sill molding and chrome door handles. A choice of seven body colors is available, including the “shining black pearl”, inaccessible to Noah and Voxy. Under the hood without surprises: Toyota Esquire will offer a 2.0-liter gasoline engine 3ZR-FAE and a CVT-i CVT with a start-stop system; or a proprietary hybrid system based on the 1.8-liter 2ZR-FXE unit. Toyota Esquire features not only a luxurious exterior, but also a rich interior design. By the way, this model, in principle, did not offer simplified configurations of the type “X C Package” for Voxy and “X V Package” for Noah. In the initial configuration, the Xi Esquire minivan will offer a 3-spoke steering wheel with genuine leather braid and a gear knob in genuine leather / ebony. Piano lacquer inserts are combined with a rich metal finish. The standard in the expensive Gi version is a fully automatic air conditioner with Nano E air purification system. Three rows of seats, upholstered in artificial leather, can accommodate from seven to eight people, depending on the Esquire configuration. If desired, the third row is dismantled, and the second is pushed back, freeing up enormous space for the rear passengers - this advantage is available in a 7-seater version. In 2016, Esquire introduced a special Gi Black-Tailored equipment with black elements in the design, including tinted optics, a combination of black faux leather and fabric trim. Advanced equipment also includes climate control in the rear.

The main feature of the new Toyota Esquire, like the Noah / Voxy models, is a hybrid powerplant borrowed from the Toyota Prius: a 1.8-liter gasoline engine paired with an electric motor. Even the power of the installation is the same - 136 hp. Consumption in mixed mode - 4.2 liters per hundred. 20% more than the Prius, but the minivan’s body is much heavier. The hybrid's electric transmission is variable, and the drive is implemented only on the front wheels. Nickel-metal hydride batteries are mounted under the front seats. Models with a classic powerplant are equipped with a 2.0-liter 3ZR-FAE. The same were put on the last generation. The engine was modernized to improve efficiency in the medium and low ranges. At the same time, the maximum power sank a little. If the previous generation developed 158 hp, then the current one only 152 hp, and the maximum torque decreased to 19.3 kg-m from the previous 20. In combination with the engine restart system, the fuel consumption is 6.25 l / 100 km The traditional power plant is aggregated with a variable gearbox equipped with a mechanism for forcibly changing the range of operation, or in a simple way - seven pseudo-gears. Both pre-drive and all-wheel drive versions are available. Toyota's suspension Toyota Esquire completely repeats that of Noah / Voxy - a front independent design (suspension strut like MacPherson strut) and a semi-independent rear (torsion beam). The developers managed to minimize roll in corners, achieving a more even course and stability on the road. Minivan disc brakes (front ventilated), foot type parking brake, electric power steering. The wheelbase of Toyota Esquire is 2850 mm. The length of the machine is 4695 mm, the total width is 1695 mm, and the height is 1825 mm. The dimensions of the cabin are impressive: 2930 x 1540 x 1400 (L x W x H). The width of the opening of the sliding doors is 805 mm. The opening of the tailgate is 1100 mm in the narrowest place, while the seats of the 3rd row folded along the sides do not interfere with loading at all. Height from the ground to the boot floor level - 500 mm (535 mm - 4WD).  Toyota Esquire has a safe GOA body, seven airbags, active head restraints, belts with pretensioners and force limiters, child seat fasteners. The equipment also includes numerous active safety systems and a standard (from January 2016) set of Toyota Safety Sense C systems for all Esquire trim levels, which includes a collision avoidance system based on a laser radar and a camera, a lane departure warning function and automatic long-range shine. In the third generation, the Noah / Voxy / Esquire family offers the highest level of safety. A spacious interior, a full third row of seats, a flexible transformation system make the car attractive for large families and travel lovers. There is a choice of power plants - traditional gasoline or a hybrid. At the same time, the design remains an amateur, the ground clearance is clearly designed for exceptionally high-quality roads, sound insulation and decoration materials leave much to be desired.