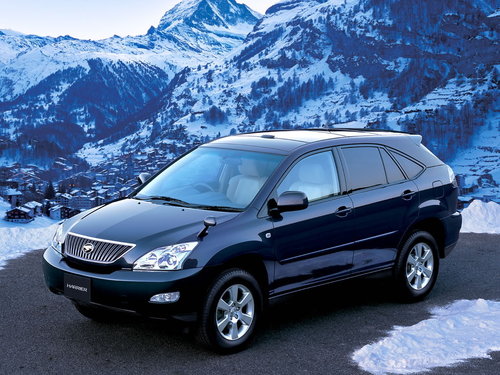 Electrics
SUV
The first generation Toyota Harrier was presented by magnificent top-class SUVs. The development of the concept of the model resulted in the appearance on the Japanese market in 2003 of the second generation Harrier. The dimensions of the body slightly increased compared to the previous generation, the safety and functionality of the passenger space of the passenger compartment increased. The appearance of Harrier, whose left-hand drive is Lexus RX, has become even more luxurious and dynamic. A significant role in this was played by triangular headlights of an acute shape and transparent brake lights. The design of the control panel in the cabin evokes associations with the wings of a falcon. The successful introduction of hybrid technologies in the Toyota model range did not disregard this luxury SUV. The Harrier Hybrid model was born in 2005 as a result of the installation of a THSII hybrid system on a car. The left-hand drive analog of the Harrier Hybrid - the Lexus RX 400h - was successfully sold in North America.
The second generation Harrier looked even more advantageous in terms of the offer of trim levels, while a certain improvement in the model almost did not affect the cost of the most inexpensive cars, but the upper limit corresponding to the top level rose. It is understandable: the premium version of the Harrier in the "AIRS" configuration is a truly luxury car. In addition to the fact that in this configuration the car is equipped with air suspension, 18-inch alloy wheels, the leather interior, electric rear door, heated and electric seats, adaptive xenon headlights, a huge sunroof, climate control and cruise control complement the overall luxury. , rain sensor, DVD-player, three cameras, a smart audio system and other options, many of which are accessories only for the domestic market and are often not available in left-hand drive analogs. This premium SUV is equipped with different types of engines. The most optimal choice for power is a 6-cylinder V-shaped engine. At first, the second-generation Harrier was powered by a 1MZ-FE 3-liter engine with a capacity of 220 hp. At the same time, the maximum power he has in the zone is 5800 rpm, and the maximum torque (304 Nm, which is quite serious) is achieved at 4400 rpm. After the modernization of 2006, this engine was replaced by a 3.5-liter 2GR-FE, the maximum power of which (280 l. sec.) falls at 6200 rpm, and the torque is even more impressive - 346 Nm at 4700 rpm. Both engines are designed for Premium (AI-98) gasoline, and fuel consumption in mixed mode for both is approximately 10.3 liters per 100 km in front-wheel drive versions and 10.6 in all-wheel drive versions. The "younger" 2.4-liter engine has a modest appetite per liter with a small one, it consumes regular Regular fuel, but in terms of power, of course, it is inferior significantly - it produces 160 "forces" (5600 rpm) and a torque of 221 Nm (at 4000 rpm). The main difference between the hybrid Harrier and its smaller hybrid "brothers" is a more efficient power plant. Under the hood there is a full-fledged powerful three-liter V-shaped 6-cylinder engine 3MZ-FE with a volume of 3.3 liters. And thanks to the additional electric motor, it was possible to achieve traction, which can only be compared with similar machines with a much larger engine capacity. The total power of the power plant reaches 272 hp, and the consumption in 10-15 mode is only 5.6 liters of gasoline per 100 km, i.e. the amount of fuel that the car consumes is similar to the consumption of a small car of the Toyota Corolla class. Speaking about such an important indicator as specific power, it is worth noting that even taking into account the weight of the car (its weight is almost almost 2 tons), the hybrid Harrier has it much better than the 2.4-liter gasoline version. Given the reduced fuel consumption, the size of the fuel tank was reduced from 72 to 65 liters.

Unlike the base model, which is equipped with an automatic transmission, only a CVT is offered for Harrier Hybrid. At the same time, contrary to the often observed tendency for manufacturers to make hybrids single-drive (due to space saving), even if the base model provides for 4WD, the 2005 Harrier hybrid was produced exclusively in four-wheel drive versions.  The Toyota Harrier suspension has not changed structurally compared to the previous generation - it is completely independent, on suspension struts with springs. Both front and rear brakes are disc (ventilated front). A distinctive feature of Harrier is not only a high ground clearance, but also a generally good geometric cross-country ability, due to which active attacks on nature are possible without risk of damaging the bumpers or sitting on the belly - of course, choosing roads within reason. And the air suspension (where it is) provides this luxurious SUV with excellent stabilization and car behavior when driving on asphalt.

Harrier safety is quite high, given the status of the car. In the new generation, the list of standard systems includes front and side airbags (option) airbags, auxiliary braking system Brake Assist, anti-lock braking system ABS with brake force distribution (EBD system). Among other things, the safety of the driver and passengers of Harrier is ensured by seat belts with pre-tensioners and load-limiters, additional stiffening ribs in the doors, and a ruggedized body. Toyota Harrier crash test results are consistently high - according to NASVA (Japan), the car received five stars.

The second generation Harrier, having gone through a number of modernizations, lasted on the assembly line for a total of more than ten years - is this not an indicator of phenomenal popularity and high class. The car belongs to the category of elite models, which additionally contributes to the formation of cult status. In general, the second generation is widely represented on the market, with a rather serious variety of prices and, despite the right-hand drive, makes decent competition to its left-hand drive Lexus counterpart.

Hybrid Harrier occupies a special position among cars with a mixed type of traction - both in terms of the proposed level of comfort and, of course, in its prestige. At the same time, unlike the classic gasoline version, which competes quite well in the secondary market with its left-hand drive analogue, the right-hand drive Harrier Hybrid at comparable prices is still significantly inferior to the Lexus RX 400h, which at one time became the first officially delivered car to Russia with a hybrid powerplant.