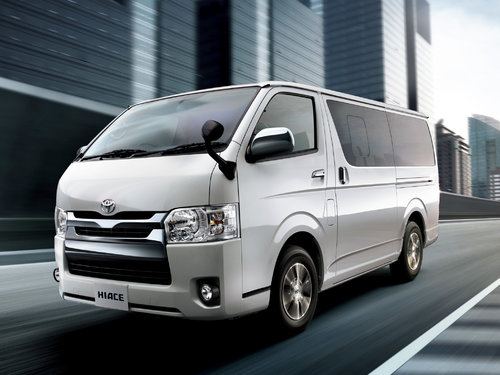 Electrics
Van
The passenger-and-freight version of the Hiace Van minivan in the basic version has one or two rows of seats and offers ample opportunities for transporting goods. Toyota Hiace has traditionally been a single-volume model since its birth in 1967. This car is successfully sold in the markets of most countries and is popular all over the world due to its reliability and huge stock of space. The new, fifth generation Hiace (H200 series) is characterized by increased interior space and an improved security system. The Hiace minibus and the fifth-generation Regius Ace van are worthy representatives of their name.
While many models cut their lines as much as possible, leaving a minimum of configurations, Toyota “vans” are rich in many designs. And we are not talking about some interior trifles. Cars differ in much more serious things. For example, with various combinations of body size and seat arrangement: “Long” and “Super Long” modifications are available, presented in the form of a 2- or 5-seater cargo-passenger “Van” (there are also versions with two benches at the back, accommodating up to 9 people), 10 -seater comfortable "Wagon" and 15-seater "Commuter" bus. At the same time, if the case of standard full-size modifications has a length of 4840 mm, then the Hiace Super Long has a body length of 5380 mm. The width of the body of different versions of Hiace varies from 1695 to 1880 mm. Height - from 1985 to 2285 mm. Cargo with a bench behind the front seats Regius Ace, often offered without upholstery of the interior panels of the cargo compartment, in body versions is no less diverse and offers many options for specific purposes of commercial use.

Van Toyota Hiace, belonging to the category "4-number", has the largest cargo compartment among classmates - its length is as much as 3000 mm (with a Super Long body - 3540 mm). Height - 1320-1590 mm. Width - 1120-1545 mm. The new generation Hiace features a wide sliding door, low entry step. Depending on the modification, the cars are equipped with an automatic door drive, an optitron dashboard, interior shutters, in abundance there are holders, cup holders, boxes for things. The list of standard equipment on all models includes a mechanism for manually aligning the front lights and a brake light above the rear window. The range of folding the front passenger backrest in luxury trim versions of the Van and Commuter versions has been increased. Since 2005, an optional navigation system has been installed on a DVD or hard disk. In 2007 - the first minor change (the shape of the front grille, seat upholstery). In 2010, another restyling was carried out. The standard equipment includes a “polite” interior lighting, anti-theft system and more. Unlike the previous generation, which used a very wide range of power units, the new model is equipped with only three types of engines, all of them are in-line 4-cylinder ones. The petrol 1TR-FE with a volume of 2 liters develops a power of 133 hp. and has a torque of 182 Nm. Its more voluminous (2.7 liters) fellow 2TR-FE - 151 hp. and 241 Nm. In addition, a turbocharged 2.5-liter diesel engine with a direct injection system of 2KD-FTV is used - with a capacity of 109 liters. with. and a torque of 260 Nm. In 2007, diesel engines received a new 3-liter 1KD-FTV diesel engine (144 hp, 300 Nm) with a variable turbine section, as well as a highly efficient DPR exhaust aftertreatment system. The car can be equipped with either a manual gearbox or an automatic. At the same time, even in the domestic market, the passenger Hiace is limited in units - only an automatic transmission and a 2.7-liter gasoline engine. The commercial Hiace and Regius Ace are much more diverse.

The Hiace suspension is a combination of a double wishbone design in the front and a dependent spring suspension in the back. The ride height (175-195 mm), especially given the long base, is suitable exclusively for urban use of this car. Well, what a commercial Toyota for the domestic market does without 4WD! All-wheel drive modifications are mandatory here - 4WD is organized according to the FullTime STD-II scheme (permanent four-wheel drive, symmetrical cylindrical center differential with viscous clutch). Increased security requirements forced the fifth-generation Hiace developers to work hard on the model. Some lengthening of the front overhang reduced the likelihood of serious collision damage. In addition, the body structure itself was revised, new solutions were introduced into the design of the steering wheel and brake pedal. Since 2010, for all trim levels (except DX), the standard has become the automatic door lock function in accordance with the speed of the car. The machine is equipped with frontal airbags, ABS, Brake Assist systems, seat belts with load limiters and pretensioners.

The incredible variety of modifications of Toyota Hiace, especially in what is offered for the domestic Japanese market, can be envied by any other model. So it is no coincidence that right-hand drive cars make up a significant part of those cars that are operated in our country and are offered on the secondary market. Given the location of the steering wheel, versions with 5-door bodies are interesting, fortunately, a lot of such modifications are offered for 3-6 seats.