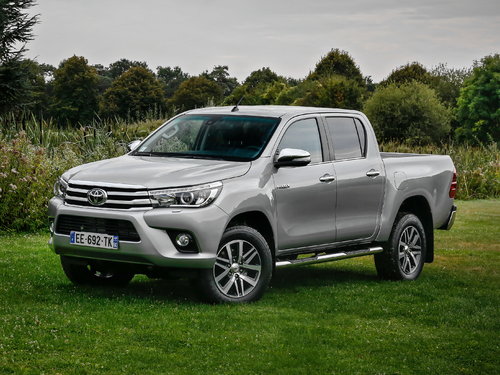 Electrics
Pickup
The eighth generation of the Toyota Hilux pickup truck was introduced in May 2015 in Australia and Bangkok. The generation change affected not only the exterior of the car, but also the technical component: Hilux received a completely new frame, a suspension with changed characteristics, a line of turbo diesel engines of the GD series, equipped with new 6-speed gearboxes, was specially developed for the new generation of Hilux. The exterior has undergone significant changes from the head optics to the smoothed contour of the arches. Narrow headlights with LED strips reach the grille trimmed with chrome. At the back you can note the new shape of the lamps and chrome trim on the bumper. The interior has changed much more: the Japanese paid more attention to quality finishes and ergonomics. Now this is a real salon, and not just a pickup cabin, arranged on the principle of "nothing more." In Russia, the acceptance of orders for a new car began in July 2015 in all the salons of official dealers and authorized partners of Toyota. Three complete sets are offered: "Standard", "Comfort" and "Prestige".
The equipment of the Toyota Hilux starter modification with a 2.4-liter turbodiesel includes: halogen headlights with automatic shut-off, side mirrors with heating and electric drive, air conditioning, front and rear power windows, an additional heater for the passenger compartment and engine, a washer fluid level sensor and much more. To this list, the Comfort package adds 17 "alloy wheels, front fog lights, tinted rear windows, leather-wrapped steering wheel, folding side mirrors with heating and power, heated front seats, cruise control, CD / MP3 audio system / WMA / USB with 6 speakers, Bluetooth, 4.2 '' color display on the dashboard, 7 "LCD display tablet on the center console. The top-of-the-line Prestige equipment is offered with a 2.8-liter diesel engine and is distinguished by the presence of R18 alloy wheels, side steps, power windows with the Auto function, climate control, electrically adjustable front seats, an intelligent car access system and engine start, as well as improved set of security systems.

The eighth generation of Hilux is equipped with new, quieter and more efficient engines (turbodiesels of the GD 2 series. 4 and 2.8 replaced KD 2.5 and 3.0). The power increase is negligible and amounts to only 6 “horses”, in contrast to the torque, which increased by 57 and 90 Nm, respectively. The 2.4 engine is now combined with a six-speed "mechanics", 2.8 - with a six-band automatic. The 2.4-liter engine consumes 8.9 liters of diesel per 100 km in the urban cycle, 6.4 liters in the suburban and 7.3 liters in the combined cycle. The same parameters with a 2.8-liter engine will be: 10.9 / 7.1 / 8.5 liters per 100 km. Toyota Hilux has a front independent suspension - independent, wishbone, with springs and telescopic shock absorbers, with anti-roll bar. The rear suspension is traditionally dependent, spring. The reinforced stiffness of the new frame has increased load capacity, the processing of springs and shock absorbers, coupled with an independent front suspension, have provided improved handling. The pickup increased in length by 70 mm, in width - by 95 mm, the height decreased by 35 mm, and the ground clearance was 227 mm. The wheelbase has remained the same, as well as the minimum turning radius - 3085 mm and 6.4 m, respectively. The creators of the new Hilux managed to increase the off-road qualities of the SUV by installing a rear differential lock in the rear axle of all pickup configurations to achieve optimal grip. Disabling the front differential (ADD) is a standard feature.