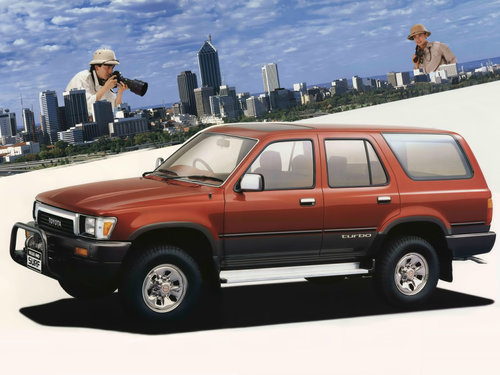 Electrics
SUV
On the basis of the Hilux pickup truck in 1984, a closed-body Hilux Surf jeep was created. The second generation of the car was published in 1989. Unlike the previous generation, equipped with a removable plastic top made of fiberglass, the new generation received an all-metal body. This model provides 2WD-4WD switching with a touch (“one touch”). There are 3- and 5-door body options, in addition, there is also a 4-door cargo version of the car. Additionally, a popular modification with a wider body (Wide Body) appeared. In the North American market, the car is represented by an analog called Toyota 4Runner.
The 1989 model car had a more modern body, rich interior, offering different upholstery options: velor, leather. Other options have appeared that correspond to an increased level of comfort: a full electric package, an electric sunroof and mirrors, an air conditioner, a second “stove”, cruise control, an expensive audio system with a CD player. The back door is of the lowering type and opens like a pickup truck, but at the same time it is equipped with an automatic window regulator. An impressive trunk can easily be turned into a sleeping compartment - a great option for those who choose to nature with an overnight stay. In general, the seats provide a comfortable passenger seat, the front ones have many adjustments. In 1992, the car underwent a restyling of the body, affecting mainly the front and rear lights, dimensions, turn signals and grille. One of the most common Hilux Surf engines is the 3VZ-E petrol injection engine, a 6-cylinder V-shaped engine with two valves per cylinder and a power of 145 hp. (torque 245 Nm). Often there is a modest gasoline 3Y-E with a volume of 2 liters (97 hp, 160 Nm). The first generation diesel power units are represented by 2.4-liter engines 2L-T and 2L-TE with a capacity of 94 and 97 hp respectively (torque - 216 and 240 Nm), and also, since 1993, the new 1KZ-T engine, which is considered not only one of the most reliable diesel engines of the company, but also outstanding in terms of power characteristics. This three-liter engine develops 130 hp, and an impressive maximum torque of 289 Nm is achieved at only 2000 rpm. In combination with automatic transmission, engine power is increased to 150 hp. The Hilux Surf automatic transmission has a system for switching the driving mode to a more “powerful” one and vice versa. Along with the "automatic" was proposed and 5-speed "mechanics".

Without losing any reliability, the second-generation Hilux Surf front suspension became independent - two arms with a torsion bar. The back remained the classic type - dependent, spring. The cargo past makes itself felt - the car is a bit rough in motion, but a sturdy chassis rightfully makes it possible to evaluate itself over many years of operation, withstanding heavy loads in bad roads. The car’s transmission is of the Part Time 4WD type with a rigidly connected front-wheel drive without an interaxle differential and a reduction gear can have a different design. This is either freewheels in the front hubs or the electro-pneumatic front differential shut-off mechanism (ADD system). In the latter case, the use of four-wheel drive is maximally simplified, since the hub couplings requiring manual intervention are absent.

Car safety, as is typical for most SUVs of that time, is not at a high level. Not immediately, but three-point seat belts become standard, child seat fasteners and such an option, useful from the point of view of safety, as an additional brake light appear. To ensure better passive safety, the body was modified - thanks to the advent of stiffeners, the protection against side impact was improved. On individual versions, an anti-lock brake system can be installed. One of the main advantages of Toyota Hilux Surf is its reliability and enormous margin of safety. The car is also very interesting in terms of tuning - many manufacturers offer a variety of products for this popular SUV, designed to improve off-road performance and design. Prices even for older cars with high mileage can be quite high. At the same time, it must be understood that a considerable percentage of the market is made up of specimens that have passed through the hands of various kinds of extreme people, or even more than once, and close attention should be paid to checking the technical condition.