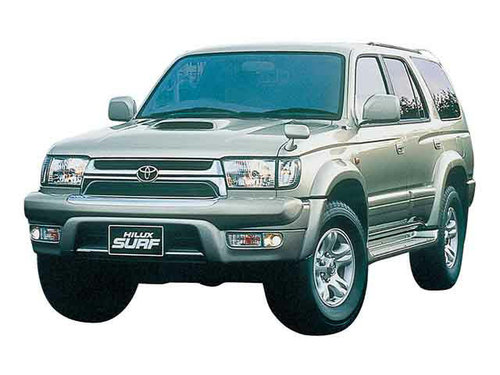 Electrics
SUV
The third generation Hilux Surf is ideally suited for urban use. Improved characteristics of previous generations of the model. The platform, including the chassis, has been completely redesigned, new engines have been added. The car has acquired a more streamlined body and an even more comfortable interior. As a result of the fact that this model used a front double independent suspension on springs, the Hilux Surf became noticeably softer, and the central “thinking” differential, which includes a 4WD system depending on road conditions, made the car more attractive for driving as in a city cycle and off-road. In addition, the car is also available in rear-wheel drive.
The third-generation Hilux Surf is able to please its owners "in a light" comfortable interior, in some trim levels very richly equipped. If the inexpensive rear-wheel Sport Sportner as standard offers simple fabric upholstery, the dominance of gray plastic in the cabin, an analog instrument panel with “pale” white scales, then in the interior of expensive versions, details such as wood trim panels will not surprise anyone , leather inserts, Recaro sports seats with excellent lateral support, Momo three-spoke sports steering wheel or standard steering wheel, but again, leather-trimmed; and the chic interior itself - with velor upholstery in bright colors. The instrument panel has an optitron backlight and more expressive scales with an abundance of pictograms, and under the ceiling, above the rear-view mirror, there is a “flight-navigation” instrument package (krenomer, altimeter, compass). The transformable rear row of the car allows you to get a huge trunk, where you can cram everything you need for a suburban outing.

As already mentioned, the Hilux Surf suspension is completely redesigned and softer. In some versions, the transmission received a MultiMode 4WD system. Like the previous generation, there is still a plug-in front axle with an ADD system, but an interaxle differential has appeared in the transfer case, thanks to which all-wheel drive can be used constantly in any conditions, plus there is the possibility of locking. However, in some versions, the Part Time system, which is usual for this jeep, is still used - a hard-drive front-wheel drive without an interaxle differential. Both there and there is a reduction gear, which increases the off-road qualities of the car by an order of magnitude. Optionally, it can be equipped with a friction-type rear differential.

The updated Hilux Surf has been significantly improved in terms of security. In the standard equipment, the car received two airbags (driver and front passenger), front belts with tensioners, child seat mounts, anti-lock braking system. If the first and second generations of this car could not boast of high crash test results, and in addition had a high center of gravity, often leading to a rollover, then the third Hilux Surf, to exclude this probability, made the track wider, and generally passive safety performance got better. Among other things, to improve visibility, the car received an elegant mirror on the wing, and the rear mirror in the expensive versions was originally hidden in a spoiler - it is retractable, with an electric drive. The third-generation Toyota Hilux Surf came close to comfortable premium-class SUVs, and it’s worth considering that this generation was created on a common platform with the LC Prado 90. The car is of great interest to the market, especially for outdoor enthusiasts. In the secondary market, there are still many cars in good technical condition with reasonable prices, and well-equipped versions are available.