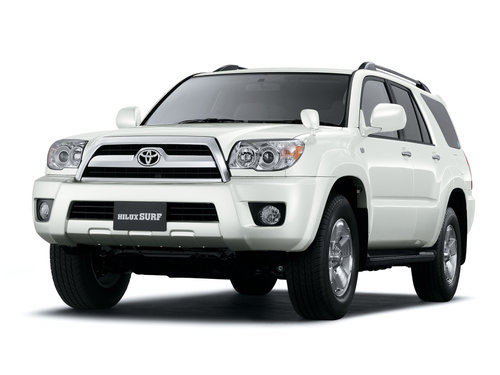 Electrics
SUV
The popular Toyota Hilux Surf SUV in this generation was produced only in a 5-door version with five seats. Despite the fact that the performance of the front end of the body is becoming more aggressive, the Hilux Surf grill remains always original and easily recognizable. Compared with the previous generation, the external dimensions of the body and the interior volume have increased, but the chassis has remained unchanged. Interior design has become more sporty. All trim levels are now equipped with a 4-speed automatic transmission. The car is available in all-wheel drive and four-wheel drive versions.
The interior of the fourth-generation Hilux Surf has been completely redesigned. The instrument panel, consisting of three dials, as if pulled out of the panel closer to the driver; very spectacular can be called the design of the door trim with wide comfortable armrests. In the center of the massive front panel there is a large multifunction monitor, below it there is a digital LCD display of separate climate control, climate controls are even lower, the buttons integrated into the "round" ones resemble, oddly enough, the flower petals. In general, the convenience of the cabin increased due to a larger variety of containers and boxes. The car trunk is very interesting - the shelf in it in the upper position divides it into two levels; if necessary, use the entire volume can be put on the floor. Of the expensive options of the highest class, we note a leather interior, electric seats, thresholds with backlight, electric sunroof, etc.

If we talk about engines, then here, like in the Land Cruiser, gasoline engines with a volume of 2.7 to 4 liters and a 3-liter turbodiesel are installed. The base engine 3RZ-FE (2.7) has a power of 150 hp. Since 2004, he was replaced by a new 2TR-FE engine with a variable valve timing system and a power of 163 hp. The 5VZ-FE (3.4) gasoline engine has a power of 185 hp. Derived from the previous generation, it was put on the Hilux Surf until July 2005, when it was replaced by the 1GR-FE engine more suitable for the top versions - after all, it has a capacity of 249 liters. with. and no less decent maximum torque - 380 Nm. Completes the range of engines 1KD-FTV turbodiesel with a capacity of 170 hp, also known from the previous generation.

Having a traditional type of suspension - front double wishbones and continuous axle at the rear - this model, nevertheless, gives great pleasure when operating in poor road conditions. The car is equipped with a MultiMode all-wheel drive system, which provides ease of transmission control and the ability to select different options, up to a downshift with a hard locking center differential. An optional LSD rear differential is available. The rear suspension can also be equipped with a pneumatic system with adjustable stiffness - this is an indicator of the highest class.

If we talk about the safety of Toyota Hilux Surf, then in this generation, as standard, there are frontal airbags for the driver and passenger, as an option - side airbags and curtain airbags. In addition, the car is equipped with child seat mounts, door stiffeners, anti-lock braking system with EBD (electronic brake force distribution system) and Brake Assist (auxiliary braking system). The car body has increased strength. Thanks to the presence of auxiliary mirrors, entry and exit from the parking lot are greatly facilitated.

Taking pride of place among the frame jeeps, the fourth-generation Toyota Hilux Surf has evolved significantly in terms of comfort, while at the same time not losing its off-road qualities and legendary reliability. He has a modern design, a chic interior. Prices for cars of recent years are quite high, but a large offer of engines and equipment options provides the necessary wealth of choice.