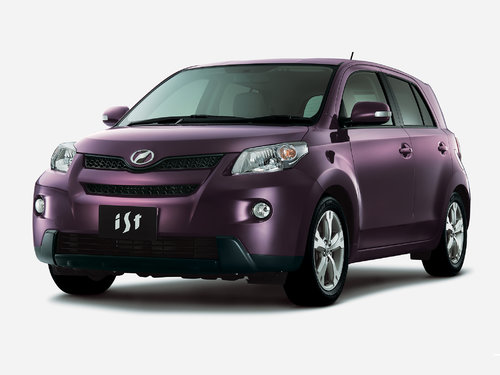 Electrics
Hatchback
In the second generation, the compact car Toyota Ist inherited the external data of a small crossover from its predecessor. The updated body became wider, and the car moved to the "3 number" category. Standing on wheels of large diameter, Ist has grown a little and in height. An original image is created by the trapezoidal profile of the body, a large grille and black bumper protection elements - all these details work out the image of the car for a big city. The unusual futuristic design of the panel with the instruments that returned to the place in front of the driver resembles radar screens. The rear seats are equipped with a sliding mechanism and folding backs, while each backrest can be folded separately from the other. Like its predecessor, the new Ist was offered in foreign markets - as a model of Toyota Urban Cruiser in Europe and Latin America and Scion XD in the USA. When creating the Toyota Ist, a fully digital model was used, which allowed to reduce real costs and increase the speed of work on the new car. The lineup of the second generation Ist (XP110) was significantly redrawn, there were fewer trim levels, but the equipment was much improved. The cabin has become more convenient, the steering column is adjustable not only by tilt, but also by departure; fully automatic air conditioning has become an accessory of all modifications; mounted side mirrors with repeaters. In expensive trim levels there is an intelligent access system, a remote control key, xenon headlights, front and rear spoilers, a multifunction steering wheel, a rearview camera, climate control with a large round display and touch-sensitive mode control buttons, the engine starts / stops from the button. Initially, the car was offered to customers in three versions: the basic configuration 150X, the expanded 150G and the top 180G with the most powerful engine. In 2009, modifications appeared for people with disabilities Welcab. Later, an inexpensive version of the 150X C package began to be offered with simpler equipment, in particular, manual air conditioning, etc.

One of the revolutionary decisions of the creators of the second generation of Ist is the transition to more powerful engines with the installation of a base engine of 1.5 liters, which is justified for the grown-up subcompact, given the increased curb weight of the car to 1210 kg. One and a half liter engine 1NZ-FE in combination with a variator develops 103 hp in all-wheel drive modifications and 109 hp in front-wheel drive. In 2009, the engine, transmission and generator settings were optimized for front-wheel drive versions of the car with a 1.5-liter engine. As a result, more efficient fuel consumption. In 10/15 mode, the car consumes 5.4 liters of gasoline per 100 km (previously - 5.6 liters). For the 180G kits manufactured from 2008 to 2010, a 1.8-liter engine of the 2ZR-FE series with a capacity of 132 hp was intended. With it, the specific power of the car reaches 8.86 kg / hp, which objectively affects the improved dynamics. And fuel consumption in 10/15 mode is acceptable 6.5 liters per “hundred”. Cars with this engine are equipped only with an automatic transmission and offer only front-wheel drive. The car has an independent MacPherson strut front suspension, semi-independent rear suspension, on a torsion beam. The minimum turning radius has grown up to 5.5 meters, and this is pretty decent, however, it is not surprising, because the wheelbase of the car increased by almost 10 cm - up to 2460 mm, the length of both axles also changed in the direction of increase. At the same time, clearance became a little more - due to large-diameter wheels and structural changes in the chassis. This went to the benefit of the model, in addition to everything that received a new all-wheel drive system (where it is) - the rear wheels are now connected by an electromechanical clutch, with an active torque control system to ensure the most stable movement, regardless of road conditions. This unconditional plus of the model is intended purely for the domestic market and is not present in left-hand drive analogs. Serious progress has occurred in the safety of the car. He got a rear active head restraints of a new design. In addition to the front and side airbags, there are now safety shutters that open to the entire length of the cabin. As before, the car is equipped with a full set of standard electronic systems such as ABS (anti-lock braking system), EBD (electronic brake force distribution system), Brake Assist (auxiliary braking), and since 2012 the dynamic stabilization system has been included in the standard equipment. Toyota Ist is definitely one of the best city cars. However, even the prices for used cars of the second generation are quite high against the background of numerous classmates. But this is a natural payment for excellent quality, reliability and level of equipment that are not in doubt. The advantage of the proposal in this generation is, of course, for one and a half liter versions, but modifications with a 1.8 liter engine equipped with a traditional “automatic” are not uncommon.