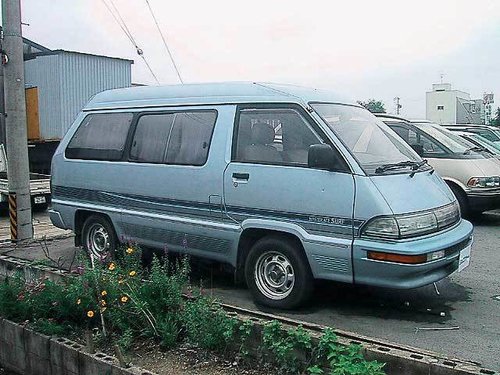 Electrics
Van
The reason for the popularity of the Lite Ace / Master Ace / Town Ace family of minibuses is the huge number of versions that were available under these three models. There are many versions: a different roof height was adjacent to a different number of hatches; one or two sliding doors; very luxurious or, on the contrary, unpretentious "wooden" interior. At the same time, the Master Ace Surf model was considered the most advanced: the car was a variant of the Town Ace in the passenger (Wagon) version with a medium or high roof, utilitarian commercial versions were completely absent in its lineup, and the car received mainly high-quality interiors to increase its competitiveness. The exterior design of the Toyota Master Ace Surf was originally (the model was released in 1982) shared with the North American version of the Town Ace R20 / 30 - Toyota Van, and the main differences were large bumpers in the American style and a spectacular rectangular four-headlamp front optics. After restyling in 1988, the car underwent significant changes in the exterior and interior, while the difference in appearance between Town Ace and Master Ace Surf was almost eliminated. Inside the top versions of Master Ace Surf, you could see chic salons for those times with carpets, upholstery of seats and panels with flock and digital instrument combinations, separate second-row seats with individual armrests, a stove / air conditioner for the passenger compartment, a six-window sky roof (“Aquarium”) or “twin moon roof” with two hatches. In addition to good equipment, a wide range of accessories was offered, such as refrigerators, televisions or high-quality audio systems.  The Toyota Master Ace Surf (R20, R30) engine range after restyling in 1988 includes only the most powerful engines from the Town Ace line. This is a 85 horsepower diesel 2C-T. and gasoline: carburetor 2YJ (1.8 l, 79 hp) and 3Y-EU with an EFI injection system (2.0 l, 97 hp). In general, with proper maintenance, the listed engines are unpretentious and resourceful, the best in this regard is the 2.0 liter injection. In diesel engines, due to design features, the slightest malfunctions of the cooling system can easily lead to overheating and cracking in the cylinder head. It is worth noting that the power unit on all Aces is located longitudinally above the front axle under the floor of the passenger compartment, which implies some difficulties in maintenance and repair.

With a continuous beam at the rear, the front suspension is an “adult” two-link design. The drive is carried out on back wheels. Since 1998, some versions of Master Ace Surf have been equipped with electronic shock absorber stiffness control and all-wheel drive. All-wheel drive models with front axle and lower gear have good cross, but the possibilities are limited by a low-hanging transfer case. Ground clearance - 160-180 mm. The minimum turning radius is 4.5 m. Compared to the Lite Ace model of the M30 / 40 series (this difference is typical for cars until 1992), the Town and Master R20 / 30 are more spacious - this is due to differences in body size and wheelbase. The safety approach is typical of the time when the Master Ace Surf of the R20, R30 generation was produced. The car has a safety design of the front panel and steering wheel, head restraints and seat belts (three-point for the front seats and waist on the rear). The cabless body layout is not effective enough from the point of view of passive safety, but in those years was considered a common thing. The Lite Ace / Master Ace / Town Ace family was the forerunner of Toyota's large Emina family of minivans. Quality and popular! Suffice it to say that with these models the company conquered all of Asia, North America and the Pacific region. And in Russia, a whole generation has grown on the used Aces. Not surprisingly, these vans are among the largest second-hand vans on the market. Their advantages can be called reliability, endurance, spaciousness. The engines of those years are unpretentious in terms of fuel quality, generally simple and maintainable, although low-power and uneconomical. Finding a car in good technical condition will not be easy, but spare parts are more affordable than for some other Japanese counterparts in the class of the same years of manufacture.