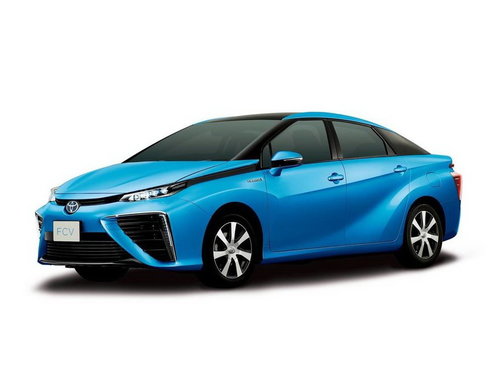 Electrics
Sedan
Toyota Mirai is a four-door four-seater mid-size sedan, its dimensions are similar to those of the eighth generation Toyota Camry sedan, so the car is quite big. The name Mirai translates from Japanese as "future." The heart of the car is the proprietary Toyota Fuel Cell System (TFCS), where Fuel Cell is a fuel cell (an electrochemical device that converts the chemical energy of a fuel into electricity).
The fuel used in the TFSC is hydrogen - it was precisely on this alternative energy source that Toyota relied on. Arguments in his favor: hydrogen can be obtained from a wide range of natural resources, from by-products of life (for example, from sewage), as well as from water using renewable energy (from wind generators, solar panels, and so on). In a compressed form, hydrogen has a higher energy density than storage batteries; it is easy to store and transport.

Hydrogen is converted into electrical energy using Toyota FC Stack - a fuel cell block. Its maximum power is 114 kW, while it is compact and in many respects “best” or “first” in the world (however, competition in this segment is not high, so it’s not very difficult to be on the leader list yet). From the FC Stack, the energy goes to the FC Boost Converter, which raises the system voltage to 650 volts. Next and last in line is a modern synchronous AC electric motor with a power of 113 kW (154 hp ) and a maximum torque of 335 Nm. All this action is supplemented by a nickel-metal hydride battery, which accumulates regenerative energy, as well as two high-pressure tanks for storing hydrogen in volumes of 60 and 62.4 liters. According to Toyota, you can start a Mirai power plant at temperatures up to -30 degrees Celsius.

Toyota promises that Mirai will bring real driving pleasure - the car has a low center of gravity and impressive torque. Acceleration to "hundreds" will take a little more than 9 seconds, acceleration from 40 to 65 km / h - 3 seconds. In addition to decent behavior on the road, the owner of the hydrogen car gets a range of up to 650 km, a unique design screaming to the neighbors in the stream “Look, I bought a car of the future!”, And a mobile electric generator with a capacity of 9 kW.