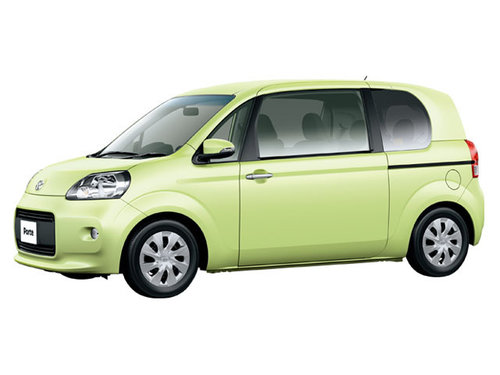 Electrics
Hatchback
Porte and its Spade look-alike with an aggressive front end are hard to find. Only Peugeot 1007 is recalled. However, the original “Frenchman” was produced for only four years, and the Toyota model has been living on the assembly line since 2004, and eight years after the change of generation.
Structurally, Porte / Spade are commonplace. Based on the Toyota Class B platform (Vitz / Platz, etc.), hatchbacks or, possibly, compact cars have the corresponding attributes. McPherson front and curl beam at the rear. Differences from the previous generation include the variator, which replaced the "automatic". And the 95-horsepower 1.3-liter 1NR-FE, which gave way to the 87-horsepower 2NZ -FE of the same volume. In general, an ordinary representative of a specified segment.

The unusual thing is that, as before, the Porte / Spade has the only sliding door on the left, behind which there is an opening 1020 mm wide. With this "gate" access is open both on the front seat and on the rear. The floor remained absolutely flat, due to which the height of the cabin at the same level - 1380 mm. And with the same wheelbase, the distance between the backs of the front seats and the sofa has even slightly increased. However, toyotovtsy were not limited to this, adding another one in the swing door on the right, which was not on the first generation Porte.