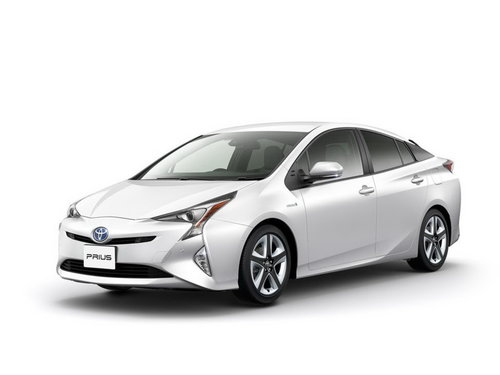 Electrics
Hatchback
September 8, 2015 in Las Vegas, the presentation of the next, fourth-generation hybrid Toyota Prius. The new Prius with the XW50 index largely inherited the style of the Toyota Mirai hydrogen car and almost came close to it in size - in any case, compared with its predecessor, it has grown quite well in length and a little in width. It is worth noting that the Prius was the first global brand model built on the new TNGA platform. This gave a gain in body rigidity (by 60%), plus the car received a lower center of gravity (including due to the low power plant). The hybrid powerplant is built on the basis of a 1.8-liter gasoline engine with an index of 2ZR-FXE with a capacity of 98 hp. The total return is 122 hp. Different batteries are installed on the new Prius depending on the market. For example, for countries with milder climates, a new lithium-ion module is offered. For the Russian market, Prius is installed with time-tested and proven reliability nickel-metal hydride batteries with a capacity of 1.3 kWh.
In the Russian market, Toyota Prius IV (XW50) can only be purchased in the "Lux" package. A feature of the basic equipment was 15-inch alloy wheels with 195/65 R15 tires and a full-size spare tire, as well as fully LED optics (dipped and main beam headlights, daytime running lights, fog lights and taillights). Among other equipment Toyota Prius offers dual-zone climate control, engine start button, two 4.2-inch displays on the dashboard. The seats have leather upholstery and mechanical adjustment of the driver's seat in 6 directions, and the front passenger seats in 4 directions. Plus, the driver's seat is additionally equipped with electrically adjustable lumbar support. In addition, by default, the new Prius is equipped with a JBL premium audio system with 10 speakers, a multimedia system with a 7-inch screen, a navigator with access to traffic information, and an ERA-GLONASS device. The winter package includes a 2-stage heated front seats with zones of varying intensity of heating, heated side mirrors, an indicator of a low level of washer fluid, an additional electric interior heater. For an extra charge, a metallic and mother-of-pearl paint coat is provided.

The hybrid system is based on the Atkinson 1.8-liter 2ZR-FXE engine, equipped with the ETCS-i electronic throttle and the new VVT-i valve timing system. Compared to its predecessor, the power plant has been completely redesigned and today is characterized by the highest thermal efficiency in the world - it reaches 40%. All the “electrical” components of the hybrid - electric motors, a control module, batteries - have become smaller and lighter. They also worked on a planetary gearbox, which became smaller in size, and its losses decreased by about 20%. The fuel consumption declared by the manufacturer is 2.9-3.0 liters per 100 km in urban and combined cycles, respectively. The maximum speed reaches 180 km / h.

As already mentioned, the fourth-generation Prius is built on the TNGA modular architecture, which will soon become one of the main platforms in Toyota's lineup. The car has an independent front suspension with suspension struts such as MacPherson strut and multi-link rear suspension. Compared with the previous generation, the car increased in length by 60 mm (up to 4540 mm), in width by 15 mm (up to 1760 mm), the height decreased by 20 mm and is 1470 mm, the wheelbase remained unchanged (2700 mm). The ride height of the new Toyota Prius is 136 mm. It is worth noting such features of the new Prius, such as an increased glazing area and a lower bonnet line (by 52 mm), due to which the view becomes better. The battery pack is now located under the rear seat, and not under the trunk, the volume of which was increased by 56 liters (up to 502 liters). The standard battery was transferred back to the engine compartment.

As for security, here the Prius XW50 is equipped with the latest technology. As standard equipment, he received seven airbags (front, side, curtains for all rows of seats, driver knee airbag), active head restraints of the first row of seats, Isofix child seat mounting system. The set of electronic systems includes tire pressure sensors, anti-lock braking system and other active safety and dynamics control systems: electronic brake force distribution (EBD), emergency brake assist (BAS), directional stability system (VSC +), traction control (TRC). The list also includes such systems as rain and light sensors, cruise control, a rear view camera with dynamic marking lines, a projection display. According to EuroNCAP, the car is recognized as one of the safest, which allowed him to get a maximum of five stars. ????