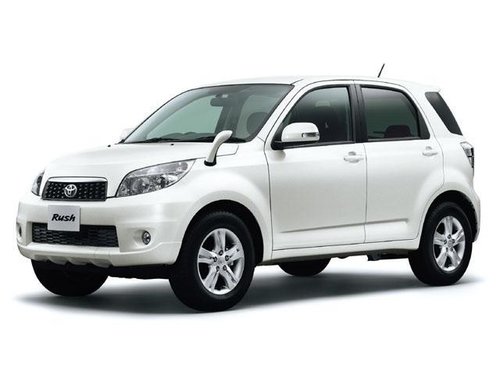 Electrics
SUV
In November 2008, sales of the updated Toyota Rush model began in the Japanese domestic market (the car is the twin of the Daihatsu Be-Go model and is manufactured under the OEM agreement). Designers freshened the appearance of bumpers and false radiator grilles, proposed a new design of 16-inch aluminum wheels. The rear headlight unit acquired clear lenses. Some changes have occurred in the cabin: leather seats have improved suede inserts, and the dashboard design has been slightly modified. Not without functional changes. The location of the audio control on the steering wheel was made more convenient, and improvements in the aerodynamics of the body and in the engine idling allowed to reduce fuel consumption by 5%. It will not be amiss to note that Toyota Rush is an example of a comfortable city car, complemented by the qualities of a full-fledged all-terrain vehicle. The latter are provided by the presence of an all-wheel drive system of the full-time 4WD type, ideal for poor roads, and forced locking of the center differential (by simply pressing a button in the passenger compartment). But there are rear-wheel drive versions. The engine of the car remained the same - a 1.5-liter gasoline engine with 109 hp.
The interior of the Toyota Rush 2009 model year includes a number of important changes. First of all, it is necessary to note the changed design of the instrument cluster - it now has a single design instead of three separate wells. The trim has been improved, its color can be chosen from dark gray and grayish-beige (previously only the first was available). A new modification “G limited” has been added, which differs from “G” in seat trim with Alcantara and xenon lamps. The new multi-function steering wheel is equipped with audio control buttons. It is presented in CD / MP3 format and can connect external devices via AUX. The interior decoration has improved, new color solutions have been proposed. The black interior with leather upholstery (option) looks particularly impressive. Standard equipment includes power mirrors, rear wiper, steering wheel with vertical adjustment, power windows front and rear. A more expensive version will offer front fog lights, aluminum wheels, climate control, a smart key, a multi-function display that shows fuel consumption, time, and outside temperature.

As a power plant Toyota Rush proposed gasoline engine series 3SZ-VE. The engine is 4-cylinder, with an in-line arrangement of cylinders, two camshafts and a 16-valve timing mechanism, equipped with a DVVT system. With a displacement of 1,495 cc, it develops a maximum power of 109 hp. at 6000 rpm and a maximum torque of 141 Nm at 4400 rpm. Such an engine provides sufficient off-road traction, while remaining dynamic at high speeds. Depending on the type of transmission and drive on one liter of gasoline, the car is able to run up to 14.8-15.4 km instead of the previous 14-15.2 km. The fuel tank has a capacity of 50 l.

Toyota Rush has the following design features: a robust monocoque monocoque body with a “built-in staircase”, McPherson-type front suspension, and a rigid rear axle with Panhard springs. Overall dimensions allow to carry it to a compact class. The length of the car is 3995-4055 mm, width - 1695 mm, height - 1690-1705 mm. Wheelbase - 2580 mm. Ground clearance - decent 190-200 mm. Small overhangs are also a plus, the wheels of the car are located as close to the corners of the body as possible to ensure the optimal gauge. The minimum turning radius at Toyota Rush is declared at 4.9 m. When the vehicle is fully loaded (5 people), the boot volume is 380 liters. If you fold the rear seats, you get a flat cargo space of 755 liters, while the mountain bike with 26-inch wheels even enters the car.

Toyota Rush has a safe body and will offer up to six airbags (two are standard and optional side airbags and curtain airbags). The design of the front bumper and hood reduce the likelihood of injuries for pedestrians. The basic equipment includes an ABS system and electronic brake force distribution (EBD) to maximize braking performance and minimize skidding. For a surcharge, a VSC stabilization system was offered. In addition, four-wheel drive vehicles with automatic transmission can be supplemented with assistance systems when descending from a hill and when climbing to it.

Toyota Rush is created in the best traditions of compact cars and in many respects is not inferior to similar SUV models with 2.0-liter engines. But it has a more compact size, which can play a decisive role when buying. The car has its drawbacks, among them the owners distinguish the following: poor sound insulation, stiffer suspension, “diseases” with the steering rack and piston (the 3SZ-VE engine is demanding on the quality of gasoline and oil). Given the likely use of "mud baths" this "microjeep" will not prevent additional anti-corrosion treatment of arches, hidden cavities.