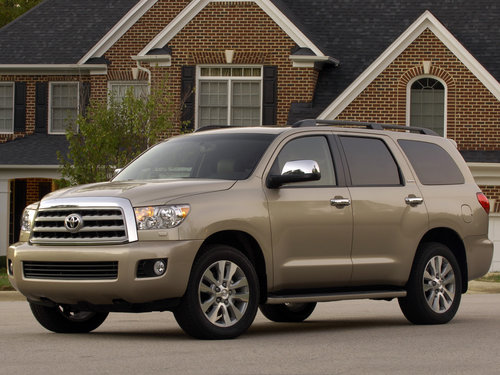 Electrics
SUV
Sequoia, Toyota's largest SUV, with the exception of the Mega Cruiser, as in the first generation, was developed for the North American market and is manufactured in Indiana. Despite the fact that in 2010 company representatives announced the removal of this large SUV from production due to lower sales, the same year the engine was replaced. The youngest of the two units - a 4.7-liter 276-horsepower 2UZ -FE - gave way to the new 1UR -FE with a volume of 4.6 liters and a capacity of 310 forces. At the same time, a 5-speed automatic transmission remained in the past, now Sequoia has a transmission with exclusively six gears. However, the main technical innovation was the appearance of a 5.7-liter V 8 3UR -FE, which produces 381 liters. with. In the rear-wheel drive version (4WD is made according to the Multi-Mode scheme), the power is even excessive, although it allows a large SUV to gain a hundred in just over 6 seconds.
Japanese technical roots and good driving performance on roads with different surfaces cannot hide the orientation towards the American market. With a huge trunk and limousine in the rear seats, the Sequoia does not have a high payload and expensive interior trim materials.