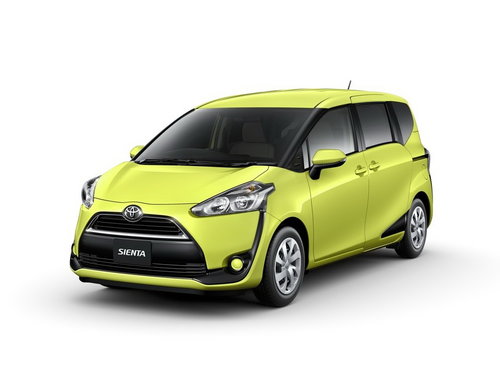 Electrics
Van
In 2015, 12 years after the launch of the new Toyota Sienta model, this 7-seater minivan was fully updated. For the new generation, the developers came up with a new concept, abandoning the clumsy forms in favor of a more athletic character, inspired by the design of trekking shoes. The lateral silhouette with the waist line ascending to the rear of the body is dictated by the “theatrical” seating arrangement (the second row is located slightly higher than the first, the third is slightly higher than the second). But still, the first thing that catches your eye is the design of the front bumper of the new Sienta. Headlights, foglights and a radiator grill are connected by the bold decorative line emphasizing corners of a bumper. A similar unusual “pattern” marked the rear bumper.
The model is offered in eight body colors, including the new lemon yellow Air Yellow. On request, the parts are painted in a contrasting color: blue or brown metallic. In the trim, there are inserts of matte chrome and black piano lacquer, as well as optimistic bright orange accents: for example, the upper glove box suddenly turns out to be completely orange inside.

Under the second row seats there is a flat gas tank, and in the case of a hybrid, a nickel-metal hydride battery is located almost there, under the feet of the passengers. Thus, the passengers of the second row got at their disposal a flat floor without a high step at the entrance. In addition, the maximum opening of the open sliding door increased by 50 mm, and increased by 25 mm, the distance from the knees of passengers to the backs of the front seats. The third row is not neglected: here, the seats themselves became 7 cm wider. If necessary, the third row is completely folded under the second, forming an impressive luggage compartment.

The second generation Sienta, in addition to the traditional engine with a capacity of 109 liters. with. (103 hp for 4WD), received a THS II hybrid installation, which includes a main engine with 74 hp, an electric motor and a nickel-metal hydride battery - the total power plant output is 100 hp Transmission for all modifications is a variator.

All cars can be equipped with a modern complex of Toyota Safety Sense C safety systems, which with the help of a sensor camera and a laser radar helps to prevent a collision with other vehicles, monitors road markings and automatically switches the high beam to the dipped and back.