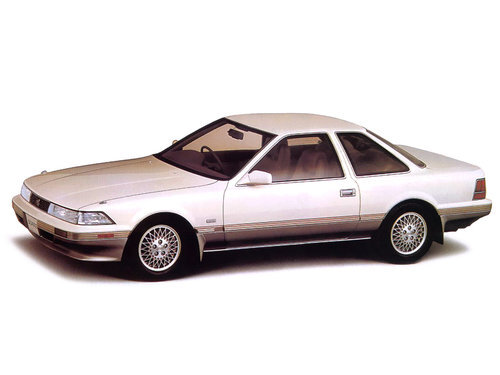 Best-selling parts
Coupe
Toyota Soarer is Toyota's best two-door coupe. The second generation cars, which appeared after the models of the first loudly declared themselves (and not only at a high price), collected the most advanced technical achievements, thereby becoming the most high-status cars made in Japan. Soarer Z20 kept the outlines of the first generation models and acquired an independent, beautiful appearance. It was equipped with engines of 2 liters, 2 liters of twin-turbo and 3 liters.
When developing the exterior of the second-generation Toyota Soarer, some common motives were used with the models of the large Mark II family, while the car shares the platform with the Toyota Supra (A70). The car was advanced in every way. The special shape of the door hinges facilitates entry and exit in narrow spaces. Developing LED LED technology, the developers have significantly improved the electronic dashboard, which has become more convenient and informative. The Toyota Electro Multivision system, which appeared in the previous Z10, now allows you to load a data cassette and display on the display instructions for handling vehicle equipment or a highway map. On the screen, it was also possible to observe all the systems of the car, including suspension modes.

In the second generation, Toyota Soarer began to offer even more modifications. The range of two-liter six-cylinder engines includes three atmospheric variations of the 1G engine: SOHC-unit 1G-EU with a capacity of 105 liters. with. and DOHC versions 1G-FE and 1G-GEU TWINCAM24 with a return of 135 and 140 hp, as well as the 1G-GTEU twin turbo developed on its basis, developing a maximum of 185-210 hp The flagship models were equipped with the 7M-GTEU TWINCAM24 TURBO engine, which in different versions produced 230 or 240 hp. All motors are considered exemplary reliable and resourceful. Soarer was equipped with both a mechanical 5-speed gearbox and an automatic 4-speed, traditionally keeping the rear-wheel drive.  The suspension of the second generation model received a structurally similar scheme to the famous Toyota 2000GT model - double wishbones front and rear. In addition to the TEMS electronic suspension, which was installed on some models, the world's first electronically controlled air suspension was offered for the top versions of the 3.0GT Limited instead of conventional springs. In the new generation, the body dimensions changed slightly and amounted to 4675 x 1730 x 1340 mm (L x W x H). The wheelbase stretched quite a bit - from 2660 to 2670 mm. But due to a more thought-out configuration of the cabin, its dimensions have increased quite well: 1820 x 1420 x 1105 mm compared to 1775 x 1410 x 1090 in the previous generation. Behind Soarer became more spacious. And he still has a fairly roomy trunk. Interestingly, in 1989, the model was used for a rather interesting idea. In April 1989, Japan collected 500 unique cars - Toyota Soarer Aerocabin. All these cars featured a unique body with a retractable roof and rear window. However, for this I had to sacrifice not only part of the trunk, but also remove the rear seats. The car turned out to be double and with a rather original appearance.

The attention to safety in the second generation has become noticeably higher. Toyota Soarer received a four-wheel anti-lock braking system, a seat belt for the central rear passenger (since 1987), a high-mounted LED brake light built into the rear spoiler. A list of optional equipment included cruise control.

In the second generation, Toyota Soarer was even more expensive than its predecessor, but this did not frighten buyers at all. At home, the car became a real hit in its class and was produced until April 1991, when the next generational change took place. In the Russian market, the second-hand Soarer Z20 is rightly considered one of the iconic models with excellent external and technical data. Along with Supra, it is also an interesting object for tuning.