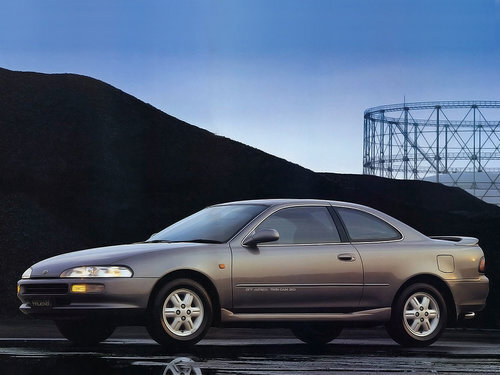 Best-selling parts
Coupe
In the generations of Corolla and Sprinter models, released in 1991, during the soap bubble economy, special attention was paid to the combination of operational and commercial qualities. Corolla Levin and Sprinter Trueno are essentially the same machines; despite the fact that they retained the image of previous generations, these machines have become more "advanced" in the sports direction. A spacious body and more expensive trim bring them closer to higher-end models. This is also confirmed by a feeling of comfort and a new, more sporty type of tire. In Sprinter Trueno, folding (hiding) headlights are no longer used, instead of them narrower headlights are installed, which, in turn, made it possible to abandon the grille in the front of the body.
The basic equipment in the body of the AE101 is a typical solid "Toyota" product, equipped (with options) with everything you need: a power steering, front fog lights, side direction indicators, power accessories, windows with a UV filter, folding rear seatbacks, cassette radio tape recorder. The more expensive version of the SJ is equipped with a correspondingly more powerful 1.6-liter engine, although in terms of functionality it almost corresponds to the basic version. Another thing is the GT configuration and all the more sporting options that arise from it. Here you can already find folding rear seat backs, an adjustable electric sunroof, a rear spoiler and a “broom”, a steering wheel with vertical adjustment, climate control, various casting options and other options of the highest category. The GT APEX modification became the best example of the generation, in the list of sports “wisdom” of which there is a suspension like “super strut suspension”.

The base engine of 1.5 liters, developing a capacity of 105 hp, does not shine with characteristics - this is the most budget option that this coupe could be equipped with. In the same way, with the next 1.6-liter engine with 115 hp, the Levin / Trueno is not much different from the regular version of Corolla / Sprinter. Everything changes with the 4A-GE and 4A-GZE series engines, especially when you consider a parameter such as power density. So, with a 4A-GZE engine equipped with a supercharger, it would seem that an ordinary production car is able to show an extraordinary character, due to impressive characteristics - 170 hp power and 206 Nm of torque. A little more modest performance 4A-GE - 160 hp and 162 Nm.

The standard suspension of this coupe is suspension struts with coil springs both front and rear. Both anti-roll bars are the prerogative of more expensive versions (in the base only the rear anti-roll bar). As well as full disc brakes, they are offered only in the GT configuration. Despite the fact that the weight of the car is approaching 1 ton, which is not typical for sports cars, sportiness is achieved, as already mentioned, using Super Strut Suspension and more powerful engines: 170-horsepower with a supercharger and 160-horsepower with a twin cam system. In the most “stuffed” configuration, the owner receives in addition to the LSD differential and TEMS suspension electronic control system.

The 1991-1995 generations do not offer anything special in terms of the level of security with Corolla / Sprinter security systems, but compared with previous generations, they demonstrate a correct forward movement. The standard was the presence of stiffeners in the doors, three-point belts in the rear seats, an additional brake light, and fastening a child seat. But the driver's airbag and anti-lock braking system for most trim levels is just an option.

The production of the Corolla Levin and Sprinter Trueno coupe of this generation took place during a difficult period in the economy, and by the end of the release of this series it became clear that it was unlikely to repeat the previous success, especially since some changes made during the restyling in 1993 led to some simplifications in order to reduce the cost of the car and spur demand a little. However, today this no longer plays a special role - the technical condition is of much greater importance for cars of those years offered on the secondary market. The main contingent, of course, are modifications with a 1.6-liter engine, but there are also very simple options with one and a half liter engines.