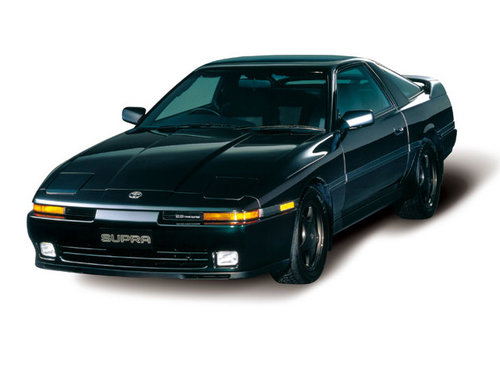 Electrics
Coupe
In 1988, the first large-scale changes were made to the Supra design: the car's front design (hood, turn signals and dimensions, fog lights) changed, the taillights and the design of the rear spoiler were updated. With another small change in August 1989, the “wide body” appeared, and the total number of modifications increased significantly. In 1990, the model also underwent aggregate changes: the 3-liter engines with which it was equipped before that were discontinued; instead, a 2.5-liter 1JZ-GTE Twin Turbo engine was installed on the Supra. Modification 2.5GT with a capacity of 280 hp became the most running.
Various improvements were made to the interior of the car, the equipment list was updated, which was especially pleasant for buyers of powerful versions, where there were 8-position sports seats made of genuine leather, special equipment like a rear spoiler and LSD, a premium audio system with 6 speakers. However, in order to make the model more accessible, relatively inexpensive specifications appeared with top-end engines, which did not have electric seats and TEMS suspensions, and instead of a digital display, conventional analog devices were installed. Since 1988, in the Toyota Supra lineup, rare modifications with a modernized 7M-GTEU engine deserve much attention - unlike the standard MA70 model, this version had more powerful turbocharging and an increased intercooler with additional ventilation - as a result, instead of the standard 240 “horses”, the specification, called "3.0GT Turbo A", had a capacity of 263 "forces" and at that time was considered the fastest car in Japan - a total of 500 cars of this series were produced. In 1990, all versions with the 7M-GTE engine were excluded from the factory. They were replaced by a 2.5GT twinturbo modification - with a 1JZ-GTE engine, which produced a maximum of 280 horsepower. The restyled lineup also retained the simpler 2.0-liter Supra: in the performance with 1G-GEU (150 hp), 1G-GTEU (Twin Turbo, 210 hp), and the role of the base passed to the new 1G unit -FE, whose power was 135 hp

Supra A70 was equipped with a suspension with double wishbones front and rear. To reduce the weight, part of the nodes was made of aluminum, and the rods were attached to the subframes to minimize vibration in the cabin. The arsenal included the TEMS system (Toyota Electronic Modulated Suspension) - an electronic suspension control system that allows you to change the damping stiffness, improving the behavior of the car depending on conditions, and in sports mode, reducing lateral body rolls and “nose bites” when braking. The car was equipped with power steering and fully disc brakes, while in more powerful versions, not only the front brakes, but also the rear ones, were ventilated. In terms of body size and other nuances, the car met the demands of the domestic Japanese market. After restyling, its length remained the same: 4620 mm, the height decreased from 1310 to 1300 mm, and the width was from 1690 to 1760 mm, depending on the modification. Rear-wheel drive and a 2595 mm wheelbase provided Toyota Supra with a minimum turning radius of 5.4 m. Since the Supra actually has a fastback body, good practical features are also incorporated in the car: the trunk is quite large - 185 liters, while the rear seats fold down parts, increasing the volume to 315 liters, allowing you to transport long things if necessary.  Toyota Supra has a body of increased rigidity that meets the safety requirements of its time. The car could be equipped with an anti-lock braking system, which has become the standard for more expensive trim levels of the second wave of the A70 generation since 1988. Modifications with a removable roof (targa) between the front and rear struts had additional body reinforcement; in Japan, this modification was called Aero top, in other markets - Targa top and Sport roof. The sporting capabilities of Toyota Supra may be modest in comparison with the real combat “supercars” of those years, but in a charged form and in the presence of “mechanics” the car looks very worthy. In the 90s, it was imported relatively massively, although the owners' cravings for speed decently reduced the population. Supra provides excellent tuning opportunities, and the relationship with many other Toyota models solves the problem of finding key parts. The body of the car is quite strong, but still requires a thorough check - such cars a priori more often get into accidents.