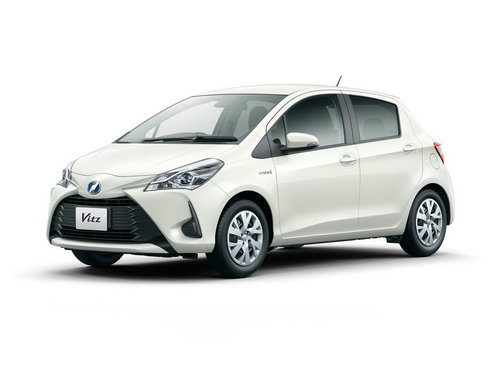 Electrics
Hatchback
The third-generation Toyota Vitz model was so successful that in 2017 the company introduced the second hatchback update for the Japanese market. Witz 2017 has a slightly modified design of the front bumper, grille and headlights, as well as a different design of the rear door and bumper. As an option, diode lighting is available, including Bi-Beam headlights. Along with the upgrade, the car has a hybrid 1.5-liter version. The manufacturer again increased the rigidity of the body due to additional welding points and reinforced fastening of the central panel of the passenger compartment. Witz has new active safety systems and other equipment, the suspension has been modernized.
In the framework of the second restyling, Vitz received a radically changed appearance, in which it is now completely impossible to recognize the initial model of the third generation, which entered the market in 2010. And in comparison with the restyling of 2014, Witz became even more lively and sharper. The key innovations in the interior were improved finishes and the appearance of three new color schemes (black and white, black and brown and black and red). The hybrid version, like other Toyota models, has a number of features in the exterior and interior and advanced equipment. In October 2017, the F Safety Edition supplemented the line of trim levels, for which, in addition to a complete set of safety systems, two body colors are available that were previously offered only for Jewela trim levels - Dark Blue Mica and Bordeaux Mica Metallic. Among the features of the special Amie series for women, which was released in the summer of 2018, are seat upholstery made of artificial leather and suede, decorative inserts of copper and brown colors, a keyless entry system and a button to start the engine.

The petrol versions of the Toyota Vitz hatchback are equipped with 3- and 4-cylinder engines, the volume of which is 1.0 liter (1KR-FE), 1.3 liter (1NR-FE and 1NR-FKE) or 1.5 liter (1NZ-FE in models GR Sport), and the power varies from 69 to 109 liters. with. For the hybrid model, a 1.5-liter unit with a factory index of 1NZ-FXE is provided. The total return of the power plant with an electric motor is 100 hp. and 169 Nm. In 2018, a special limited edition GRMN with a high-power engine was re-released. Recall, back in 2013, the Vitz GRMN Turbo model was developed, developed by GAZOO Racing. It was equipped with a 1.5-liter turbo unit, the return of which reached 152 liters. s., and the total circulation then amounted to 200 units. This time, the 212-horsepower 1.8-liter turbo engine settled under the hood of the “hottest” Witz, and production was limited to 150 copies.

The Toyota Vitz suspension retains its previous design - suspension struts in the front and torsion bar suspension in the rear. In cars with all-wheel drive, torque is actively controlled: under normal conditions, it is transmitted to the front axle, the rear axle is connected if necessary and helps when starting on a slippery surface, during acceleration or when cornering. The dimensions of the hatchback are 3885 x 1695 x 1500 mm. Interior dimensions: 1920 x 1390 x 1250 mm. Witz’s luggage compartment is small, but not the smallest by class standards. There are many compartments for things. The interior and luggage space of the hybrid version is equivalent to gasoline models due to the placement of the battery under the rear seat. In addition, the body of the hybrid version has a full length of 3945 mm (60 mm more compared to a conventional hatchback).  A more modern approach has improved the safety of the Toyota Vitz. The Toyota Safety Sense active safety complex with a package of collision avoidance systems is installed on the car of the 2017 model year. It also includes Hill Start Assist and automatic high-beam headlamp control. Since 2018, Vitz received an upgraded Toyota Safety Sense system that can recognize pedestrians during daylight hours, the efficiency of the automatic braking system has been improved, it now also works when reversing when a sonar detects a stationary object - this minimizes the risk of damage during erroneous pressing accelerator pedals in the parking lot. Twice improved, the third-generation Toyota Vitz is still a vivid example of evolutionary development, which is called “keeping up to date”. This popular compact hatchback deserves the closest interest, which, in fact, is happening on the market, where the new Vitz, despite the “incorrect” steering wheel arrangement, has already managed to win a considerable number of fans, both among the former adherents of the model and the new ones. And the prices are quite interesting.