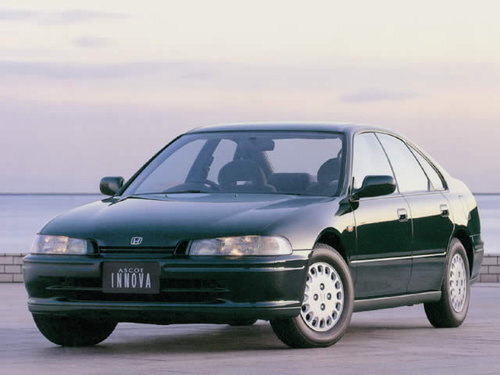 Sedan
The car is made on the basis of the first-generation Ascot model, which, in turn, was related to the 4th generation of Honda Accord cars. The Ascot Innova sedan had a 4-door hard top. It should be noted that the model was identical to the car, which in England was sold under the name Honda Accord. And also: externally, the Ascot Innova looked like a hatchback or even a coupe, that is, it looked sporty - in fact, it was a sports version of Ascot, since in addition to the 2-liter 4-cylinder engine borrowed from the Accord model , It could be equipped with an engine with a working volume of 2.3 liters, the power of which reached 165 liters. with. However, the sedan was mainly equipped only with automatic transmission, the "mechanics" was only available in the most inexpensive version.
In addition to the sporty appearance, the Ascot Innova was also distinguished by a very high-quality filling. Even in the simplest configuration there were fog lights, an adjustable steering column, a tachometer and power accessories. Options included alloy wheels (14 inches) and a rear spoiler. A mandatory attribute of expensive trim levels was a leather steering wheel, a powerful audio system, automatic air conditioning with adjustable temperature. In this case, options included 15-inch aluminum rims, a rear spoiler and a sunroof. All the above equipment, and in addition to this external body kit, boasted the top-end version 2.3 Si-Z.

The base engine for the Honda Ascot Innova was a 2-liter SOHC F20A unit with an 135-liter injection system. with. A pair of him was a 2-liter injection version of DOHC FI with a capacity of 150 "forces". Both engines are similar to the Honda Ascot model. The top 2.3-liter DOHC unit of the H23A series had a power reserve of 165 “forces”. Entry-level models with a SOHC engine could be equipped with 5-speed manual gearboxes, but the main for all three engines was a 4-speed automatic transmission. Thus, in a combination of three engines, the lineup included four modifications. If we talk about fuel consumption, then the base model on the "mechanics" it was about 7.9 liters of gasoline per 100 km, and with the "automatic" - 9.1 l / 100 km. The 2.0 Si and 2.3 Si-Z models consumed 9.1 and 9.4 l / 100 km, respectively.

The car's suspension went through an additional refinement, so the car had a more sporty ride than the Accord sedan. We can say that it is as if the Prelude was a sedan. The front of both cars is made in a similar manner. Drive Type: Front Wheel Only. There were models with four steered wheels (4WS). The brakes of the sedan are front ventilated discs, rear drum brakes (with 2.0 SOHC engine) or disc. The body length of the Ascot Innova sedan is 4670 mm, width and height are 1695 and 1380 mm. The width of the body models 2.3 increased to 1710 mm. Interior dimensions: 1975 x 1395 x 1140 (L x W x H). The length of the wheelbase is 2720 mm. Turn radius 5.5 m. The car has a fairly roomy trunk, and the distance between the backs of the first and second row of seats is sufficient to make it comfortable for those sitting behind.

In fact, the Ascot Innova could well be considered the “specific” sedan of the Accord range. It has its own special expressive design, a hardtop body with frameless doors. 2.3 Si-Z models have a very playful character and the best equipment in the line. Disadvantages are common for this category of cars of that time - it is difficult to find some parts, and the body itself is quite rare.