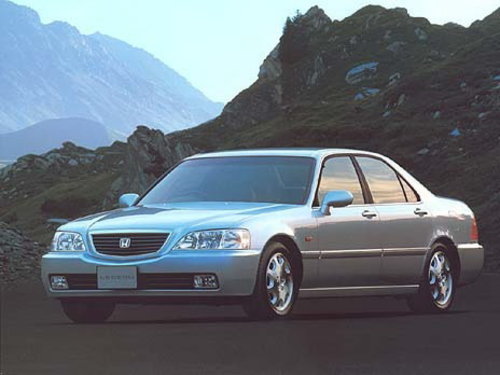 Accessories
Sedan
In 1998, the Honda Legend sedan (third-generation model) underwent some changes. They affected the exterior design - for example, the car has a new, larger radiator grille, under which a recess has appeared in the front bumper. “Fogs” are also now integrated in the bumper, and new headlights have made the head light more efficient. Significant changes have occurred in the car; special seats that absorb vibration and reduce fatigue increase comfort. New equipment was added, including one responsible for safety. Another wave of changes affected the car in 1999 - in particular, the engine (3.5 V6, 215 hp) now complies with the 2000 exhaust emission standards.  Changes in the interior of Honda Legend affected the design and functionality of the dashboard - the car has a new on-board system, with a large widescreen display on the center console, the instrument cluster and steering wheel have been updated. The car is offered in four versions: standard, Euro (less expensive, but sporty), a slightly more luxurious version of Euro Exclusive and the top version Exclusive. As standard, the sedan is equipped with front fog lights, alloy wheels (15 "), a climate control system that is adjustable for tilt and reach steering column, electric front seats. Options include a leather steering wheel and leather upholstery, sunroof. The top-end Exclusive equipment will offer a leather interior by default, and this includes 16-inch wheels with 215 / 60R16 tires, a cruise control system, electric rear seats, a premium audio system with a CD changer and more. The Euro version is distinguished by a slightly simpler finish, but this specification is focused on driving performance - there is a sports-tuned suspension and low-profile tires 215 / 55R16. Euro Exclusive version combines the driving performance of a sports performance and, with some exceptions, the luxurious filling of a top-end configuration.

The third-generation Honda Legend engine was modernized in 1999 to improve environmental performance. Its characteristics have not changed. The six-cylinder V-shaped 24-valve power unit still produces a maximum power of 215 hp, which is achieved at 5200 rpm, and the maximum torque is 312 Nm (at 2800 rpm). The engine of the Honda Legend is located longitudinally, which is somewhat unusual for a front-wheel drive car, but provides a more optimal weight distribution. The sedan was equipped with a 4-speed "automatic". Fuel consumption in 10/15 mode was declared by the manufacturer at 11.5 liters per 100 km; in the mode of 60 km / h - 6.2 l / 100 km.

Legend uses an independent suspension on all four wheels, which is rightfully the pride of Honda. Thanks to her, the car has an easy, smooth ride, which, in fact, has become one of the attractive aspects of this model. Driving performance Legend is not inferior to first-class cars. It should be especially noted that when driving a car, it was possible to achieve a relatively low noise level, including due to the maximum reduction in wind sound due to the shape of the body, which has excellent aerodynamics, and the use of new insulating materials. The dimensions of the Honda Legend in the third generation after restyling remained unchanged. The length of the sedan is 4955 mm, width 1810 mm, height 1435 mm. The wheelbase is 2910 mm. Interior dimensions: 1995 x 1475 x 1165 (L x W x H). Honda Legend has a roomy luggage compartment - its volume is 450 liters. In the third generation, the car became more convenient and due to greater attention to such utilitarian trifles as cup holders, places for storing small things, etc. After upgrading the third generation Honda Legend (KA9), the front and side airbags i-SRS with detection sensors, as well as belts with force limiters and pretensioners became the standard for all models. The set of active safety systems includes ABS with EBD, a brake assist system, and the VSA system (electronic stability control system) is an option.

The modernization of the Honda Legend played a positive role and allowed the model to linger on the assembly line until 2004. At the same time, it was this generation that became more popular in the Russian market, especially considering that after restyling the model was officially sold in our country (however, the right-hand drive Legend, as a rule, is better equipped). Reliability and unpretentiousness of the machine is not in doubt, but age takes its toll. It is worth considering the expensive service, the difficulty with finding parts.