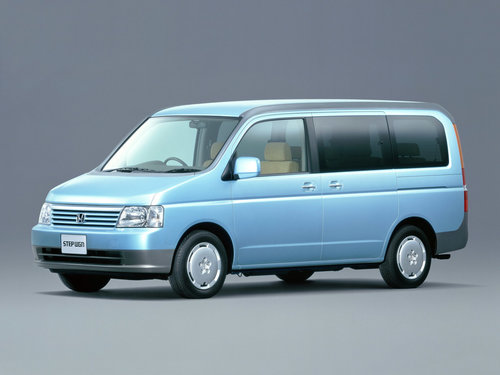 Accessories
Van
The second generation of Stepwgn, which began production in 2001, remains on the wave of popularity. Much attention in this car is given to children and their safety. The dimensions of the interior space of the RF3 / 4 series cars were slightly increased, but despite this the body has almost the same dimensions as in the first generation Stepwgn. The car is equipped with 8 seats in three rows. Chairs of the 2nd row can rotate around its axis. Such an interesting and unusual seating arrangement is a good find. The body of the top modification is equipped with an automatically sliding passenger door. In the initial phase of production (2001-2003), the second generation Stepwgn was equipped with only one 2.0-liter engine in combination with a 4-speed automatic and two types of drive. Engine - the new K20A series, with a capacity of 160 hp
Honda Stepwgn, as before, is equipped with two hinged doors + a sliding door on the left side + rear "gates". In terms of transformation capabilities, the Honda Stepwgn interior has not changed its main principles. As the developers themselves note, using the transformation of seats from the first to the third row, you can use the car interior in four main options: “play” (“game” - counter-deployed seats), “food” (restaurant mode), “sleeping” ( “Full flat” position with 3 rows laid out in a flat surface), and “product” (“cargo” version). The AT shift knob has been moved from the steering column to the console, which is very convenient. The list of proposed equipment includes a remote key, dual-zone climate control, audio system (radio or CD player), optional xenon headlights, body kit and foglights, alloy wheels with a design to choose from, wood paneling, a large monitor navigation system, a rear camera and t d.

One of the main innovations for the second-generation Honda Stepwgn was the use of the new 2-liter inline 4-cylinder DOHC i-VTEC engine, combining high power and low fuel consumption. The K20A engine is another hit from Honda. It develops a maximum power of 160 hp. (at 6500 rpm) and a torque of 191 Nm (at 4000 rpm), combined with a 4-speed automatic transmission, and the drive can be front or full. The new power unit has increased the dynamic qualities of the minivan. The latest three-way catalytic system has achieved very low emissions. As for fuel consumption, Stepwgn claims a consumption of 7.7-8.6 liters per 100 km. The volume of the fuel tank is 55-60 liters.

The Honda Stepwgn still has a front-wheel drive layout and independent front and rear suspensions. On the front axle are MacPherson struts, on the rear are double wishbones. The car was equipped with disc brakes front and rear, power steering. Compared to its predecessor, the body dimensions have changed slightly: length 4670 mm (+ 65 mm), width 1695 mm, height 1845-1860 mm (+ 15 mm). Wheelbase 2805 mm (+ 5 mm). Particularly noteworthy is the minimum turning radius, which decreased from 5.6 to 5.3 meters due to the steering rack of a new design with a variable gear ratio. The dimensions of the internal space still look pretty good: the dimensions of the cabin are 2800 x 1570 x 1350 mm, which is larger than the first generation by 70 mm in length and 5 and 15 mm in width and height. When the two rear rows are folded, the minivan has a very large cargo compartment, however, even with all three rows of seats in the back, there is still enough space for luggage.

Despite the structural principles common to the predecessor, the second-generation Stepwgn body was completely redesigned. It provides better safety in a frontal collision, frontal impact with displacement and in side impacts, as well as when turning over. Two airbags (side airbags as an option), front belts with load limiters and pretensioners, child seat mounts, side stiffeners, anti-lock braking system (ABS), auxiliary braking system and EBD (electronic brake force distribution) are standard equipment.  In the new generation, the driving performance of the Honda Stepwgn has become more advanced. High safety and reliability of the car as a whole deserves special mention. The second-generation Stepwgn began to look more modern, but still retained the “square” style. The disadvantages of the owners are called windage, susceptibility to corrosion, low ground clearance.