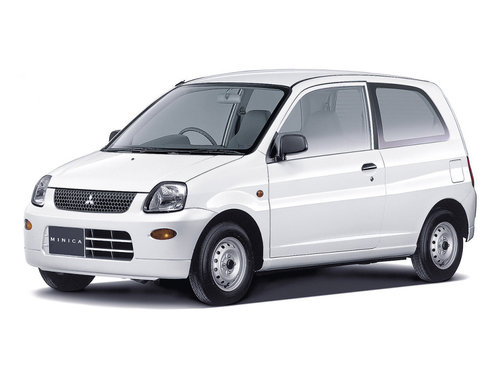 Electrics
Hatchback
The eighth generation of the Mitsubishi Minica, which became the last, was released in 1998. It meets the new standards of a light car since its release. To match it, the body size had to be slightly increased. Minica was delivered in 3- and 5-door passenger variants (which were classified as a “sedan”) and as a commercial van. In November 2000, the car appeared in an updated form - the front part changed, where there were headlights with several reflectors, a new bumper and a false radiator grille. With the upgrade of the model range, the Mitsubishi Minica classification system has been changed. The engine remains the same - all models are equipped with a 3-cylinder “aspirated” power of 50 hp.
The former cargo version of the three-door Minica under the designation Ce (Van) is now called Lyra. Manual power windows are installed in it, mirrors are manually adjusted, but there is air conditioning. A primitive “bench” with a rigid and almost vertical back is installed behind. The passenger version carries the new name Voice - there are more comfort functions: power windows and a central locking with remote control, a standard radio. In 2002, the “three-door” has a new cargo class Lyra E, which standardly offers electric windows and a radio. In 2003, the intermediate Cf series was canceled, then the manufacturer also refused the Lyra E version, so only two classes were left for the 3-door Minica: passenger Voice and cargo (Van) Lyra. In 2007, Mitsubishi completely abandoned the production of passenger Minica and the line now includes only utilitarian van Lyra. The only improvement for the three-door was the appearance in 2009 of the exclusive Black Minica in black mother-of-pearl body color.

The Mitsubishi Minica has a 3-cylinder 12-valve SOHC Lean Burn engine. The motor has a capacity of 50 "horses", a timing belt drive. Transmission - 3- or 4-speed “automatic” or 5-speed manual. Front-wheel drive or full drive. The relatively lightweight body (Minika weighs only 680-790 kg) makes the car quite frisky, allowing you to maintain speed on the highway and even accelerate somewhere, if we are talking about a relatively flat terrain. The proprietary MVV system, which ensures the burning of lean mixtures, makes the car more economical: the fuel consumption declared by the manufacturer is about 4.4 liters of gasoline per 100 km in 10/15 mode, and when driving at a speed of 60 km / h - 2.9 l / 100 km The owners also call very attractive consumption figures for the city - about 6.5 l / 100 km.

Like all keycars, the Mitsubishi Minica has a simple chassis design. Front independent suspension. Dependent on the rear trailing arms. The rack and pinion steering is equipped with power steering, disc brakes in front and drum brakes at the rear. For Minica passenger cars from model year 2001, the standard tire size became 155 / 70R13, but the cargo vans ("vans") were equipped with 145 / 80R12 wheels. Body dimensions - length 3395 mm, width 1475 mm, height 1475-1510 mm. Wheelbase 2340 mm. Interior dimensions: 1655 x 1220 x 1220 mm. If you fold the back row (the “three-door” backrest reclines only whole), it turns out a very roomy trunk - with a full load of more than 800 liters, but its standard volume is small - only 157 liters.

Recall that when developing the Minica model, the concept of a “safe body” was created, which significantly increased the reliability of the car in a collision. After restyling, the manufacturer offered two standard front airbags for passenger Mitsubishi Minica, an optional anti-lock braking system with brake assist and an EBD brake force distribution device. Minica cargo "vans" were equipped with these functions for a surcharge.

If you are used to high station wagons, then, of course, the Minica will seem to you an extremely narrow “passenger car”. However, in fact, this car retained the necessary amenities and interior comfort, in addition, the Minica is not without such qualities as excellent stability on the road and the smoothness of movement characteristic of sedans. The prices for used Minica are very low. Of course, one should take into account the small resource of the engine, the difficulty with finding spare parts, the small (and rare) size of the native wheels. Three-door body also has its pros and cons.