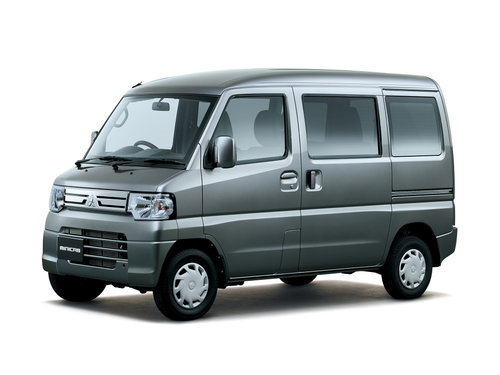 Electrics
Van
Truck
The release of the sixth-generation Mitsubishi Minicab Van commercial van continued even after the Town Box passenger model on its base was canceled (the new car under the same name Town Box is now not manufactured by Mitsubishi, but Suzuki is the OEM version of Suzuki Every Wagon). But partly to replace the previous Town Box, the Bravo series was added to the Minicab line with all the attributes of an improved class, such as a comfortable rear sofa divided into parts. Other modifications of the Minicab Van are essentially little different from the utilitarian style inherent in this model. The car is equipped with the same 48-horsepower 3-cylinder engine, and a 64-horsepower turbo engine is available for Bravo.
The next changes again affected the appearance of the Minicab Van. She has changed the design of the front end, updated optics. In the cabin, the changes are minimal - for example, in the floor console there are no cup holders between the seats, instead of them there is now a simple tray for small items. Cars of the special Bravo series are named after Mitsubishi Bravo - the predecessor of the discontinued Town Box in the previous body (U61W / 62W). They are distinguished by an improved exterior and interior equipment, regularly offer wheel caps, a CD player with AM / FM radio and two speakers; interesting upholstered seats, comfortable rear sofa, standard power accessories and air conditioning.  After the third restyling, the Mitsubishi Minicab Van was equipped with a 3-cylinder 12-valve SOHC 3G83 brand engine, which was produced in the atmospheric version and with turbocharging. In the first case, the maximum power is 48 horsepower (at 6000 rpm), and the torque reaches a value of 62 Nm (at 4000 rpm). The turbocharged engine has a maximum return of 64 “forces”, which are achieved at 6000 rpm, and the torque is 86 Nm (at 3000 rpm). There are four-wheel drive and rear-wheel drive versions. The Minicab Van engine works in conjunction with a 5-speed manual or 3- or 4-speed automatic transmission.

Mitsubishi Minicab Van has a simple “hodovka”: front independent suspension, rear dependent, both spring, guaranteeing a completely comfortable ride. Brakes - disc front and drum rear. The distance between the axles is 2390 mm, and due to small wheels with tires like 145R12-6PR, the turning radius is only 4.3 meters. External dimensions: length 3395 mm, width 1475 mm, height 1890 mm or 1785 mm with a standard roof. Despite the compactness of the body, the Minicab Van is very spacious and easy to operate, thanks to the ability to change the position of the back bench. Folding it, you can get a trunk length of 1.7 meters with a completely flat floor. The carrying capacity of the van, depending on the modification (2-4 people) is 350 or 250 kg. The Bravo models inherited from Town Box a back sofa with thick pillows and backs, which can be folded in parts. The result is a more comfortable version of a commercial car.

Despite its utility, the Mitsubishi Minicab Van is considered quite safe. The front of the body has increased safety indicators due to the fact that the car is a one-compartment with a semi-hood layout. Minicab Van 2011-2014 comes with driver and passenger airbags as standard, the rear seats have standard three-point belts for all versions, and ABS was installed for an extra charge (standard with Bravo).

A typical representative of the commercial class, Mitsubishi Minicab Van is simple and affordable. Its advantages can also be called practicality and spaciousness, high maneuverability. There are also disadvantages: a rather weak atmospheric engine, the car is light and unstable on the track, it has a rather stiff suspension, and small wheels. In 2014, the 48-year history of the original Mitsubishi Minicab was completed - after the Town Box model, it is replaced by the OEM analog of Suzuki Every.
The production of the sixth-generation Mitsubishi Minicab Truck mini-truck lasted from 1999 to 2014. The next, third restyling took place at the end of 2011. Changes again affected the appearance of the car. She has modified the front end design, updated optics. In general, Minicab Truck does not change its essence and differs little from the utilitarian style inherent in this model. Equipped with the same 48-horsepower 3-cylinder engine. In the cabin of the 2012 Minicab Truck model year, the changes are minimal - for example, there are no cup holders between the seats in the floor console, instead of them there is now a simple tray for small items. As before, Minicab Truck has a Spartan-looking interior: hard seats with upholstery made of inexpensive material, bare painted metal, dermatin-sheathed doors with meat grinders for power windows. But air conditioning and power steering have now become the standard for most trim levels, except that the most inexpensive versions still offer a minimum of equipment, where of the comfort options there is only a regular radio. In the power unit of the Mitsubishi Minicab Truck, the manufacturer did not consider it necessary to change anything. The same engine was installed - a 3-cylinder 12-valve aspirated design of SOHC, which bears the brand 3G83. Its maximum power is 48 horsepower (at 6000 rpm), and the torque reaches a value of 62 Nm (at 4000 rpm). There are four-wheel drive and rear-wheel drive versions. The Minicab Truck engine works in conjunction with a 5-speed manual or 3-speed automatic transmission. The front suspension of the Mitsubishi Minicab Truck is independent, such as the MacPherson, while the rear suspension is spring-loaded, perfectly adapted to cargo needs - the maximum load capacity is 350 kg. Minicab Truck brakes have disc brakes at the front and drum brakes at the rear. The distance between the axles of the truck is less than that of the Minicab Van model - 2200 mm versus 2390 mm. Together with small wheels with tires 145R12-6PR this gives a minimum turning radius of only 4 meters. Ground clearance 150 mm. External dimensions almost coincide with the van - length 3395 mm, width 1475 mm, height 1775-1940 mm. On the basis of this light truck, not only airborne, but also various special modifications were produced, including dump trucks, refrigerators, etc.

Despite its utility and pure cargo destination, the Mitsubishi Minicab Truck is considered quite safe. The front end has enhanced safety due to the increased front overhang and semi-bonded cab layout. For a surcharge, the truck could be equipped with airbags for the driver and passenger, as well as an anti-lock braking system. In 2012, the car was upgraded to more stringent requirements - the driver's airbag and belts with pretensioners become the standard, rear reflectors are added to increase safety when working at night.

The disadvantages of the model include a weak atmospheric engine, small wheels and a stiffer suspension. However, the truck copes with its tasks perfectly. Like its fellow van, the Mitsubishi Minicab Truck is simple and affordable. Its advantages are also practicality and sufficient carrying capacity, high maneuverability. In 2014, the 48-year history of the original Mitsubishi Minicab was completed and was replaced by an OEM model of the same name, but an analogue of Suzuki Every.