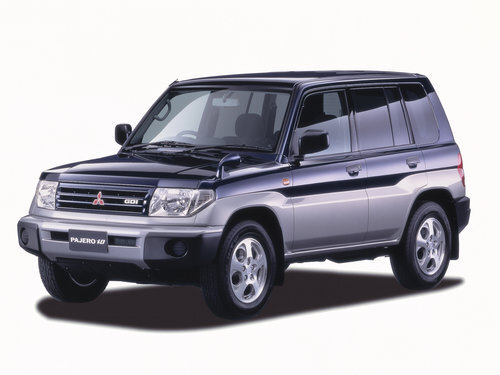 Best-selling parts
SUV
The appearance of the compact Mitsubishi Pajero iO was largely due to the fact that the demand in the SUV market is constantly changing. At some point, Mitsubishi analysts realized that new compact models were required combining ease of control and the comfort of sedans. Under these conditions, the company as soon as possible developed and released the Pajero Io model in 1998. Together with the Mini and Junior, this model continues the direction that combines spectacular external data and the practical use of the interior, as well as comfort. Pajero Io has body proportions close to the dimensions of the original Pajero - the flagship and pride of the company. It is worth noting that for some time this model was also presented on the European market in the person of its twin brother - Mitsubishi Pajero Pinin.
The main difference between Pajero iO and its smaller relatives Mini and Junior is a serious filling, which includes not only more voluminous and powerful engines, but also a significantly more comfortable interior, as well as the availability of 3- and 5-door versions, and since 2002 years, the car is only available in the latest version. For some time, the released Sorrento modification is an option similar to the Pajero Pinin from the Pininfarina design bureau. Since 2005, the car was produced only in the Active Field Edition version. This rich equipment, in turn, was offered in two versions: with a navigation system (Active Field Edition Navi) and a hard disk, or without it. Moreover, in addition to the navigator, an automatic climate control and light upholstery are offered. The event was the use of a 1.8-liter GDI (DOHC16) series engine on the Pajero iO, which was improved every year and became more and more environmentally friendly. Having a low fuel consumption (7.4 l / 100 km), a car with this 130-horsepower engine, however, is sensitive to the gas pedal. Since 2000, the Pajero iO TR version has a turbocharged version with a capacity of 160 hp, while the fuel consumption in mixed mode fits into 7.7 liters per hundred. In the same year, a two-liter version of the DOHC GDI appeared - its power was 136 hp. In 2002, meeting the objective requirements of the market, the manufacturer began to offer a more modest engine - a 4-cylinder 16-valve SOHC with a capacity of 116 hp. with conventional ECI-Multi distributed injection.

The lightweight Pajero iO SUV was available in rear-wheel or all-wheel drive versions - either permanent or plug-in. In the latter case, the Fulltime 4WD system includes a Super Select transmission with a central viscous clutch. This compact and lightweight system allows you to select 4 driving modes, including 4WD. When you turn on a lower number of gears, the central differential is forcibly blocked. The Pajero iO front suspension includes suspension struts. The rear is an independent 5-link. The minimum turning radius of the model will delight city residents - 4.9 m. At the same time, for a car, as it should be for an SUV, slight overhangs are characteristic both in front and behind and acceptable parameters of geometric cross-country ability.

The set of systems and safety features on the Pajero iO includes front driver and passenger airbags, as well as side airbags as an option. The EBD system evenly distributes braking forces and works in conjunction with ABS - anti-lock braking system. Since 2000, standard equipment for all vehicles has been equipment with seat belts with load limiters, and since 2002, cars have been equipped with front belt pretensioners. Then, as an option, Emergency Brake Assist appeared.

Mitsubishi Pajero iO belongs to a higher class than Mini and Junior, respectively, higher dynamics, level of comfort, and indeed a resource. This inevitably affects the price, which, however, is much lower than that of the full-size Pajero. So it can be justifiably argued that the Pajero iO in this large family occupies a middle ground in terms of the totality of its characteristics. The release of the model was discontinued in 2007.