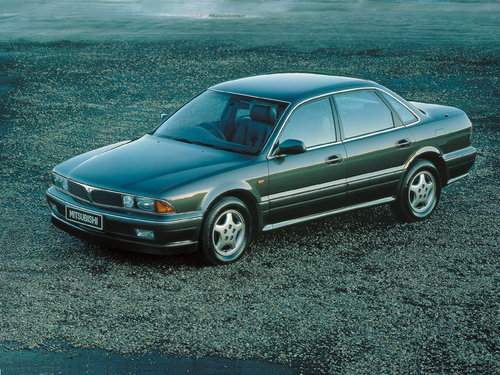 Electrics
Sedan
In 1990, during the heyday of the soap bubble economy and thanks to a change in taxation, a road was opened in Japan for the production of large, high-class cars. Sigma, released in 1990, opened this road. She differed from her hardtop brother Diamante in a sedan-type body, that is, the presence of frames on the doors. Its body had dimensions that did not fit into the head of the then Japanese: for example, the width was 1775 mm. It was equipped with 2-liter, 2.5-liter and 3-liter V-shaped 6-cylinder engines. This car completely turned the Japanese view on the body of the 3rd size. The classic “box-shaped” body design and hood shape, giving the car a resemblance to the BMW models that were extremely popular at the time, were the main reasons for the rise in Sigma's popularity.
It was the only car of that period, which was equipped with the latest science and technology. Here, an automatic valve clearance system was used, as well as 4 electronic systems: 4WS, TRC, ABS and Easy Drive. As a result of partial changes in 1992, the new 4-speed INVECS automatic transmission was introduced at Sigma.