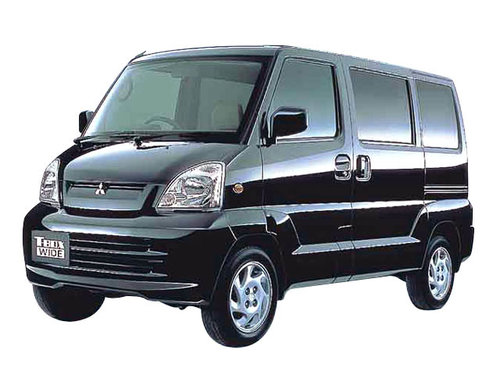 Electrics
Van
This model is based on the single box town box. Launched in June 1999, the Town Box Wide was distinguished by large front and rear bumpers, “bubble” wheel arches and an aerodynamic body kit. The body is completed as follows: two front doors + two sliding doors + rear "gates". The salon is equipped with six seats arranged in three rows. Each chair is separate from the other. Glass on a passenger sliding door opens down (“hides” in the door). Town Box Wide was powered by a 1.1-liter inline 4-cylinder SOHC engine and only a 4-speed automatic gearbox.
Mitsubishi Town Box Wide has a box-like appearance that is very practical to use. Low located thresholds are convenient for landing and disembarking. The well-thought-out seat design on all rows makes the cabin comfortable. The front panel looks very functional, in its upper part there are trays for small things, spacious compartments are provided, the “tidy” is quite informative. Box Wide has one. In it, it is equipped with air conditioning, power accessories (windows, mirrors, central locking), rear wiper, cassette player. Options included alloy wheels and front fog lights, wood trim panels. In July 1999, the limited edition “Body Art Special” series was released with body painting using airbrushing technique.

Similar to the Mitsubishi Toppo BJ Wide model, which was an “extended” version of the Toppo BJ high station wagon, the Town Box Wide model was equipped with a 4-cylinder 1.1-liter (1094 cc) SOHC16 4A31 power unit. Against the 660 cc 3-cylinder engine in the standard Town Box with its 48 “forces” and 62 Nm of torque, it had a higher traction of 100 Nm and a power of 75 “horses”, each of which “pulled” 13. 2 kg of the total weight of the car (data for the rear-wheel drive model), while the Town Box's horsepower accounted for all 18.75 kg. It is worth noting that the 4A31 engine was common to the Pajero Junior model. The transmission type of the Mitsubishi Town Box Wide was provided for only one - a 4-speed automatic transmission. The car was produced in rear-wheel or all-wheel drive (Easy Select 4WD) version. The 4WD Easy Select system, which is widely used in Mitsubishi cars, allows you to change the 2WD mode to 4WD and vice versa while the machine is moving using the switch. The suspension of the Mitsubishi Town Box Wide is structurally very simple: the front is independent, the rear is dependent, both are spring loaded, guaranteeing a completely comfortable ride. Brakes - disc front and drum rear. Steering - with hydraulic booster. Body dimensions are 3605 x 1535 x 1810 mm (L x W x H). That is 210 mm longer than the Town Box and 60 mm wider. The wheelbase of Town Box Wide is the same size as the main Town Box model - 2390 mm, but due to the larger dimensions and wheels (tire size 165 / 65R14), the turning radius is slightly increased - from 4.7 to 4.8 m The interior of the Town Box Wide is 2490 mm long (+ 650 mm, taking into account the presence of the third row), its width is 1260 mm (+40 mm), and its height is 1225 mm, which is 100 mm less - the high roof is replaced with a standard one. Free passage between all the rear seats allows you to transport long things without removing them. If necessary, the third row of seats folds to the walls, and if you fold the second row, the cabin transforms into a huge luggage compartment. The Mitsubishi Town Box Wide model was standardly equipped with driver and passenger airbags, three-point belts, side impact protection amplifiers in the doors. An anti-lock brake system was offered as an option. In the event of a collision, the front of the body has increased safety indicators due to the fact that the car is a one-compartment with a semi-hood layout.  Developing the advantages of the Town Box model in urban operation, the Mitsubishi Town Box Wide has an even more spacious cabin (4 + 2), impeccable driving characteristics, and its main advantage relative to the base model is a more powerful aspirated. But it will be fair to say that consumers who needed a six-seater car still preferred higher-class cars. Due to low demand, Town Box Wide was discontinued in August 2001. In total, about 3.5 thousand cars were produced.