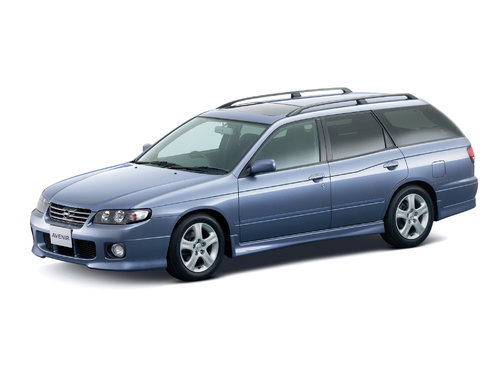 Accessories
Wagon
As a result of a number of cosmetic changes that Avenir underwent in the spring of 2000, the front of the car has changed and the interior has been partially updated. Unlike the previous version of the station wagon, the diesel engine and manual gearbox disappeared from the line (the younger petrol version of 1.8 l is now only with an “automatic”), and the offer of complete sets with a variator and a 2.0-liter aspirated, on the contrary, expanded. Thanks to the use of the new CVT transmission and the All control 4WD system on all-wheel drive versions, these cars are very economical in terms of fuel consumption. The GT4 sports all-wheel drive model with a 2.0 SR20DET turbo engine of 230 hp remains the top version. A special position was taken by the new Avenir Blastar 4WD with increased ground clearance - this model challenged the Subaru Legacy Lancaster.
After restyling in the Nissan Avenir interior, sports notes intensified, which, in particular, is noticeable in the new instrument panel. The Salut series is represented by the basic version X and the extended Si. In October 2000, a special "children's" Autech Kids series appeared with easy-to-clean upholstery, an entertainment system for rear passengers, various additional accessories and means for child safety. Distinctive features of the new Blastar model are more powerful bumpers (front with larger fog lights), aerodynamic sills and a two-tone body color, weighty handle on the trunk. The Navi edition (2001) series features a 7-inch monitor with navigation. In August 2001, the limited-edition Blastar version-S series, created in collaboration with the Salomon Sports brand, was released - it relied on special door trim for easy removal of dirt and moisture, a 100V power outlet, a waterproof boot mat and a bag for cold climates.

Regardless of the configuration, the updated Nissan Avenir W11 generation was equipped with two airbags (for driver and passenger), an anti-lock braking system, complemented by a brake force distribution system and a brake assist system, front seat belt pretensioners and force limiters, child car seat mounts, side amplifiers stiffness at the door. For an extra charge, side pillows were installed.

In the second generation, Avenir retained a recognizable silhouette with a distinctly large rear overhang and luggage compartment, the dimensions of which will appeal to connoisseurs of wagons. The rear seat is displayed separately (60:40), and not every station wagon offers an opening boot glass. Among the positive aspects are the affordable price, quite reliable engines. Cons - low ground clearance and large overhangs, the body is susceptible to corrosion. A related Expert model was also produced - a utilitarian version of the Avenir station wagon. In 2005, the car was discontinued - its successor is the third-generation Wingroad.