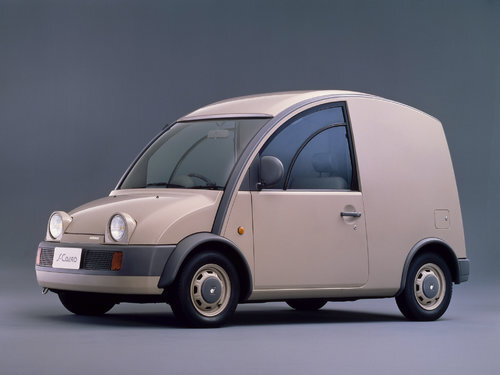 Best-selling parts
Hatchback
In an era of short-term economic recovery, Nissan practiced the production of limited series of "thematic" cars (pike car). Suffice it to recall the range of BE-1 or Figaro. S-Cargo is one of them. True, he stands somewhat apart. The car had an unusual body shape resembling a snail. If you take one of the more well-known analogues, you can compare it with the Citroen 2VC model. In any case, it was a very nice car with an original arrangement of headlights. The basic color of the body was considered white, but as for the shades, the buyer was asked to determine it himself (the “custom paint” system).
The luggage compartment had rather smooth side walls, so they could be painted as you like, or, for example, advertise your company. Individuality was enough inside the cabin. For example, dashboards were located on top of the front panel of the cabin and resembled an alarm clock in shape. It was just a dashboard, but it was made so skillfully that it could very well be a decoration of a living room. The gear shift knob was placed on the front panel in front of the driver's seat, as they later began to practice in minivans. There were variants of the car, equipped with elegant sofa-type seats, as well as vans with a soft canvas top. In a word, such versions were offered to customers, which it never occurred to anyone to buy only for the sake of cargo transportation.