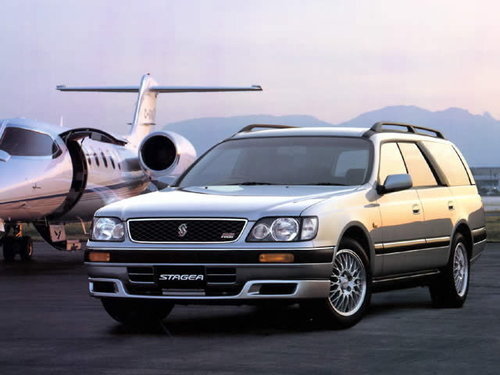 Best-selling parts
Wagon
The very first Stagea was designed as a Class L passenger station wagon and was built on the platform of the 33-Series Skyline and had a special multi-link rear suspension design. His debut took place in 1996. At that moment, only a Mitsubishi Legnum model could compete with him from Japanese cars. Not surprisingly, the rear-wheel-drive, sporty-looking Stagea has become popular. To confirm the prestige of this model, the developers equipped all categories of the machine with a 6-cylinder RB series engine. For cars of a low category, it was a motor with a displacement of 2 liters and one camshaft (SOHC), a standard 2.5-liter DOHC engine was installed on cars of the standard category. And finally, in the car of the highest “test”, it was decided to use a “turbo” engine with a working volume of 2.5 liters, which developed a capacity of 235 liters. with. As for the transmission, in the beginning all the cars with the turbo engine had only an all-wheel drive of the Attesa 4WD system with a synchronizing device. AT

In 1998, the model underwent partial modernization, as a result of which the appearance changed slightly. In particular, round fog lights were inserted into the front grill. But besides this, a number of measures were taken to improve the engine. The engine, which had a simple intake, was supplemented by the NEO system, and the power of the “turbo” motor increased to 280 hp. On versions with all-wheel drive, they began to put a 5-speed manual gearbox. In addition, there was a version with a turbo engine and rear-wheel drive. Thanks to the efforts of Autech Japan, the 260RS externally became a poured copy of the Skyline GT-R, unless you look back and see that you have a station wagon.