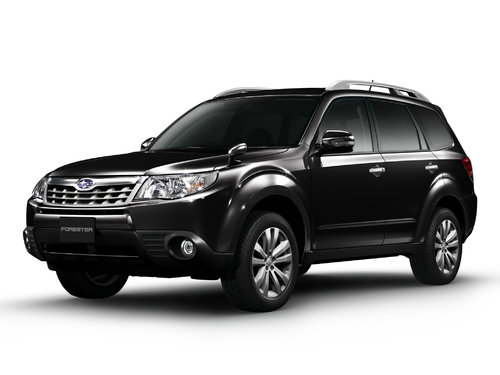 Electrics
SUV
After a facelift in 2010, the Subaru Forester for the US market received minor external changes. The front end was slightly updated, some exterior details were modified, including the rear spoiler, the design of the wheel rims, etc. A more important event for the updated Forester was the appearance of a new 2.5-liter naturally aspirated engine - while maintaining the same power of 170 hp. from. it has increased torque and improved efficiency. In addition, the lineup includes the new 2.5X Touring and 2.5XT Touring, which have become flagship in the lineup, and changes in equipment include a new audio system with enhanced capabilities and a rearview camera, TomTom navigation, and standard Bluetooth. The North American Subaru Forester (2011 model year) went on sale in six trim levels. At the same time, the basic version 2.5X is already considered a good choice: high-quality fabric seat upholstery, air conditioning with air ducts for the rear seats and a cabin filter, CD player, height adjustment and lumbar support for the driver's seat, cruise control, preparation for a trailer. Options include an automatic transmission, 16-inch moldings and roof rails. High-end models include climate control, an all-weather package (heated mirrors, seats and windscreen in the wiper area), leather upholstery, a better audio system and a CD changer. When buying a turbocharged car, a standard automatic transmission appeared, 17-inch wheels, slightly increasing ground clearance, fog lights, an electric driver's seat (10 positions), a rear-view camera, a telescopic steering column. The new top-of-the-line Touring features automatic height-adjustable xenon low-beam headlights, dual-zone climate control, a modified instrument panel, side mirrors with integrated turn signals and much more. As before, the Forester is powered by a horizontally displaced four-cylinder Boxer engine. The advantage of this design is a lower center of gravity. The newly redesigned powertrain features a double overhead camshaft and chain drive, and a longer piston stroke. The maximum power remained the same - 170 horsepower at 6,000 rpm. The maximum torque has increased from 229 to 235 Nm and is achieved at lower revs (4100 instead of the previous 4500). Transmission - 5-speed manual or four-speed automatic SportShift with manual shift. Models of the 2.5XT type are equipped with a 224 hp turbocharged engine, which has not undergone any significant changes compared to the previous version. This unit only works with an automatic transmission.

The third generation Subaru Forester is designed on the Subaru Impreza chassis. The car has independent front and rear suspensions, sports-tuned steering, disc brakes on all four wheels. The overall dimensions of the Forester body for the USA after restyling are: length 4547 mm, width 1887 mm, height 1651 mm. The wheelbase in this generation is 2615 mm. At the same time, the minimum turning radius of the car is relatively small - 5.3 meters. The luggage compartment volume is 450 liters. For safety in the 2010-2013 Forester, there are six airbags, active front seat head restraints, anti-lock braking system (ABS) with electronic brake force distribution and emergency braking system, an all-wheel drive system that works in conjunction with the vehicle dynamics control function. In the current generation, it has received high results in crash tests. The NHTSA rates it five stars in all categories except the rollover test (four stars).

Many observers called the advantages of the third generation Forester comfortable driving performance, a spacious interior and trunk, and standard four-wheel drive. The advantages of the American version were and remain powerful engines. But there are also disadvantages - for example, an outdated 4-band "automatic", besides, this is the only option for a turbocharged model. Owners of used cars complain about the cheap interior, engine noise, high maintenance costs.