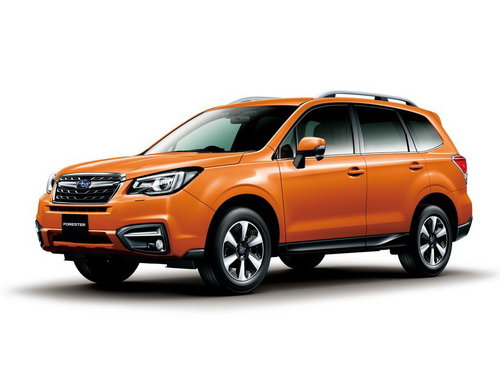 Electrics
SUV
In 2016, the American division of Subaru introduced an updated version of the Forester crossover. The car received minor changes in appearance and equipment list. In the front, a new bumper and headlights; at the rear, the optics have been improved, the optional spoiler is painted in body color, there are also several new rims and an optional Sepia Bronze Metallic paint finish. The headlights can automatically switch between low and high beam. Models with the Subaru EyeSight active safety complex have dynamic cornering lights; in addition, the system has improved cameras with increased viewing range. The list of interior changes includes thickened door windows, improved noise insulation, a new multifunctional steering wheel. Turbocharged models are now equipped with a torque vectoring system.
After restyling, the Subaru Forester crossover offers improved climate control controls, boasts new door seals and an additional soundproofing under the floor. Depending on the configuration, the car is equipped with basic multimedia with a 6.2-inch touchscreen display, a rear-view camera and satellite radio, or 7-inch in the "senior" trim levels, where the media system works with gestures, voice control and has advanced capabilities. Most versions of the crossover already have 2-stage heated front seats, side mirrors and an anti-icing system for the wipers as standard. The Premium tier includes a panoramic sunroof and alloy wheels, while the Limited models add leather upholstery, climate control and an electric tailgate. The top class Touring is distinguished by an improved interior and a powerful audio system with surround sound, dual-zone climate control, heated steering wheel.

For 2016-2018, two engines are available for the Forester - both are branded Subarov boxers. The younger models are equipped with a 2.5-liter naturally aspirated engine that develops 170 horsepower and 235 Nm of torque, in combination with a 6-speed manual transmission or a Lineartronic CVT. The 2.0XT versions are equipped with a 2.0-liter turbocharged direct injection engine. It develops 250 horsepower and 350 Nm, and is equipped exclusively with a CVT system with SI-Drive, which has Intelligent, Sport and Sport Sharp modes that change the response of the throttle and CVT. Sport Sharp mode simulates eight virtual gears, with paddle shifters. Sport and Intelligent modes are programmed for six gears. In the most powerful version, Forester demonstrates acceleration from standstill to 100 km / h in 7.5 seconds. But despite the high power ratings, American observers noted as a negative point that the model is poorly suitable for towing - the maximum trailer weight does not exceed 1,500 pounds or 680 kg. After restyling, the fourth generation Forester has been further improved in terms of suspension, brakes and steering. As usual, the 2.0XT versions feature a sport-tuned suspension on 18-inch wheels, reinforced brakes with ventilated rotors at the front and rear. An important addition to the proprietary all-wheel drive in the model was the Active Torque Vectoring system (transfers torque to the wheel, which has more grip), known from the WRX and WRX STI models. The car now holds the road even better. Additional safety in difficult conditions is provided by the X-Mode mode with hill descent control. In this generation, the Forester wheelbase is 2640 mm. The length of the cabin has grown to an impressive 2,095 mm. The trunk volume is 505-1577 liters.

For the 2017 model year, the Forester is equipped with six airbags, anti-lock brakes, traction and stability control functions, and a rear-view camera - this is standard on all cars. In addition, the Starlink Safety Plus system is installed for emergency calls and automatic notification of an accident. Options for this system include some additional services such as positioning, anti-theft functions. The EyeSight driver assistance package has been improved and its core functions (lane departure warning, head-on collision warning and preventive autobraking) are now more efficient. The refinement of the "fourth" Forester in the details made the car more interesting for buyers. It offers the most essential safety systems, all-wheel drive and reliable, confident driving in any weather, as well as on light off-road conditions. Among the disadvantages, the owners call increased demand for maintenance, low quality paint, interior, noise insulation.