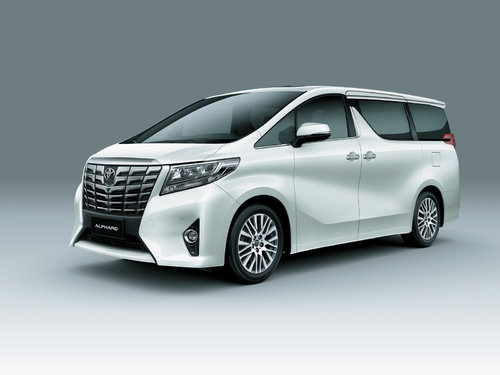 Electrics
Van
Toyota officially introduced the third generation of the Alphard (H30) luxury minivan at the end of 2014, and domestic sales began as early as January next year. Acceptance of orders for a minivan in Russia and Belarus started on February 5. The most noticeable change in the appearance of the Alphard was the new design of the front part - with a large decorative grille that visually passes into the bumper air intake. Behind attracting attention are new lights of an unusual shape. The completely new interior of the Alphard received a steering wheel and instrument panel of a different design, as well as a wider center console, with an enlarged multimedia system display. The suspension has been upgraded - instead of a torsion semi-independent suspension, the rear now has an independent design on double wishbones. In addition, engineers note increased body rigidity, improved noise and vibration isolation. In the Russian market, the car is available with only one engine option - a 6-cylinder V-shaped 2GR-FE gasoline engine (3.5 l, 275 hp), paired with a 6-speed automatic.
The new Alphard Prestige launch set includes LED dipped and main beam headlights, 16-inch alloy wheels, heated front seats, steering wheel and windshield in the wiper rest area, three-zone climate control with VIP zone control on the ceiling console and air ionizer "NanoЕ". The perforated leather interior also offers OTTOMAN electrically adjustable second-row captain chairs, a multimedia system with a 9-inch touch screen and eight speakers, LED interior lighting with four brightness levels and 16 color options. Additional comfort for passengers in the second row of seats is provided by the sunblinds of the rear door windows, tinted rear and rear side windows, as well as two sunroofs. We add that the base Alphard is equipped with electric side doors and trunk doors. The Suite includes 18 "wheels, a premium JBL audio system with 17 speakers, navigation, and an entertainment system for rear VIP passengers, including a 9" ceiling LCD monitor with WVGA resolution, a Blu-ray player, and remote control . The most luxurious performance involves the Executive Lounge equipment - interior trim with elite semi-aniline leather, OTTOMAN captain's chairs of increased comfort with heating, ventilation and a control panel in the armrests, a memory function and individual pull-out tables. In the Russian market, the third-generation Toyota Alphard minivan is offered with a 3.5-liter 6-cylinder V-shaped gasoline engine (Euro-5), developing 275 hp. at 6200 rpm and a maximum torque of 340 Nm at 4700 rpm. Drive - front. Paired with a 6-speed automatic transmission equipped with an adaptive AI-Shift shift system and manual mode, the V6 engine allows the minivan to accelerate to 100 km / h in 8.3 seconds, and the maximum speed is 200 km / h. At the same time, the average fuel consumption is 10.5 liters per 100 km. The volume of the Toyota Alphard tank is 75 liters. The new generation Toyota Alphard is equipped with a front differential with a preload. This should improve starting from a place, facilitate control of the car in turns and at high speed. It can be noted that in the homeland for Alphard, a hybrid model based on the engine of 2.5 liters of the 2AR-FXE series with a variable gearbox Sequential Shiftmatic (six fixed gears) and an electric motor on the rear axle (E-Four system), as well as 2.5- liter 2AR-FE with a CVT-i CVT variator (seven speeds to choose from). The completely independent suspension of the new Toyota Alphard (H30) received the changed characteristics of shock absorbers and springs, as well as the anti-roll bar of a changed section. Innovations are designed to improve ride and stability of the car at high speed. To reduce the noise level from the oncoming air, the engineers provided additional noise absorbing materials and a special insulating film of the windshield. The car is equipped with ventilated disc brakes front and rear and an electronic parking brake. The claimed ground clearance of the minivan is 160 mm. Body dimensions: 4915 x 1850 x 1895 mm (L x W x H). The wheelbase is 3000 mm, the turning radius is 5.7 m. As for the size of the luggage compartment, the luxury minivan is fine with this - it can accommodate up to 1900 liters. A well-thought-out transformation of the cabin helps the convenient placement of transported luggage: second-row seats are longitudinally adjustable to a large extent, the rear seats fold 50:50, compactly occupying seats along the sides, the floor has rails with luggage locks. To relax on the road, you can completely expand both rows of the rear seats.

For the active safety of the third-generation Toyota Alphard, the following systems are included that are standard equipment: anti-lock braking, brake force distribution, emergency braking, traction control and directional stability, as well as assistance when climbing a slope. The car has frontal and side airbags, curtain airbags for all rows of seats and a driver’s knee airbag, as well as an Isofix child restraint system. The standard equipment includes the ERA-GLONASS device, rear and front parking sensors, cruise control, LED lateral cornering lights, light and rain sensors.