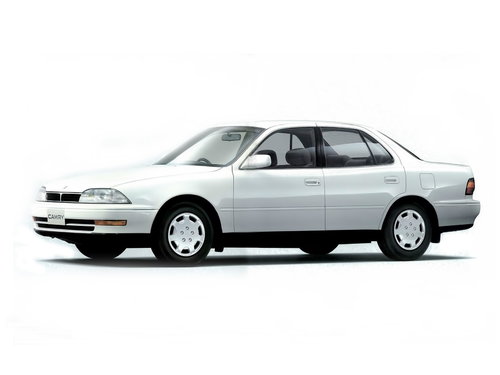 Electrics
Sedan
The release of the third-generation Toyota Camry began in 1990. In terms of performance and level of equipment, this model is a notch higher than Toyota Carina / Corona, another popular family of middle-class cars. Actually, Toyota Camry was just intended for those buyers who would like to buy a “slightly more car” for almost the same money. It is not surprising that Camry has firmly occupied its niche and has become one of the most “popular” ones both in Japan and in our country. Apart from the small differences, an almost complete copy of the Toyota Camry V30 is the Toyota Vista model in the same body. It is worth noting that these cars were intended for the domestic Japanese market, and since 1991, Toyota Camry in the wide body (XV10), sold in Japan under the name Toyota Scepter, was put into production.
A sufficiently large number of trim levels, differing in the level of trim and equipment, is very characteristic of Toyota Camry of those years. At the same time, the price difference between the basic model and the most “stuffed” one was quite significant, as people with a modest income and sufficiently wealthy showed interest in Camry. Affected by the availability of sports versions (GT), as well as chic modifications to the Camry Prominent hardtop. For example, the cost of a machine in the “2.5 Prominent G 4WS” configuration was more than twice the price of the simplest version “1. 8 XT. " In July 1992, the model was restyled, receiving, in particular, a new grille and air conditioning.

A wide range of engines capable of satisfying a wide variety of needs is another feature of this generation of Toyota Camry. The base 4S-FE 1.8-liter injection engine has a capacity of 115 hp, its more recent modifications (since 1992) - 125 hp For complete sets of a higher rank, two-liter 3S-FE engines with a capacity of 135 (140) liters were intended. with. and forced 3S-GE (165 hp) for GT versions, however, Camry was discontinued with this engine in 1992. Two V-shaped 6-cylinder gasoline engines were offered for the Camry Prominent: a two-liter 1VZ-FE (until May 1992) and a 2.5-liter 4VZ-FE, with 140 and 175 hp. respectively. However, unlike the S series, these engines, despite their good characteristics, cannot boast of the same unpretentiousness. Some modifications were made with 2C-T turbocharged diesel engines with 91 horsepower. Also quite an indisputable option in terms of buying a used car.

Toyota Camry independent suspension offers a high level of comfort. Front and back are MacPherson struts. This design made it possible to use the 4WS system (for individual trim levels) with rear steering wheels when turning the front wheels. The negative point is that it is necessary to additionally monitor the status of the rear-wheel drive. But on the other hand, by the presence of a working 4WS on a particular vehicle, we can indirectly judge its still in good technical condition. Toyota Camry transmission is either a 5-speed manual gearbox or a 4-speed “automatic” with winter and sports modes. On versions with 4WD, all-wheel drive is permanent with a symmetrical center differential, viscous lock on vehicles with a mechanical transmission and a hydromechanical coupling on machines with automatic transmission.

In terms of safety, Toyota Camry 1990 model year is quite consistent with the level of those years. The standard includes three-point seat belts, stiffeners in the doors, child seat fasteners. But ABS and a driver's airbag relied only as an option for a separate surcharge.

In our country, the peak of popularity of right-hand drive cars of this generation came in the late 90s - early 2000s, when their mass delivery took place. So all the shortcomings of this generation are more related only to the age of the cars themselves. Of the advantages of Toyota Camry, we note a spacious interior, and in general a very high level of comfort. And of course, excellent workmanship, so you can still find copies in good technical condition at a very reasonable price.