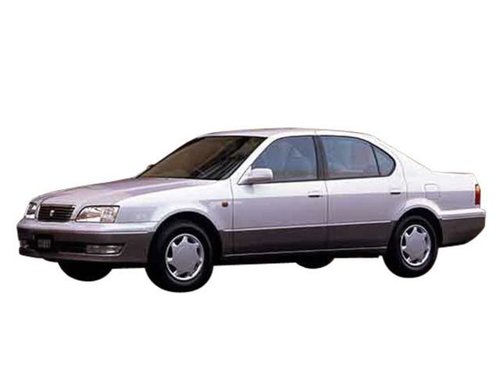 Electrics
Sedan
The fourth-generation Toyota Camry (V40), which began production in 1994, was updated in June 1996. The car received a “crystal” optics, a radiator grille of a new design with its own Camry emblem. Due to the fact that ABS and two pillows became standard for all models, increased safety. This generation of Camry for the domestic market is the latest in a series of cars with the so-called “narrow” (narrow-body) body. The aggregate line Camry V40 1996-1998 remained unchanged: gasoline (125-140 hp) and diesel (88-91 hp) inline fours combined with a manual or automatic transmission. Traditionally for the domestic market, there were some modifications with all-wheel drive.
Even the most inexpensive version of the fourth-generation Toyota Camry, called the XJ, includes fog lights, a tilt-adjustable steering column, power windows and a central locking system, automatic air conditioning, optional leather-wrapped steering wheel, wood trim. Top-end equipment ZX will offer electric front seats, a remote key, an audio system with high-quality sound, a sunroof and other equipment. A Sporting-style Touring was also offered. On the basis of the equipment version of Lumiere, the special Lumiere G series was produced, and with the package of additional options for the top version of the ZX, an optitron instrument panel was offered. Toyota Camry V40 1996-1998 offers modifications with gasoline and diesel engines. For gasoline, the 4S-FE power unit with a working volume of 1.8 liters and a capacity of 125 “horses” is the initial one, while the more powerful 2.0-liter 3S-FE has a capacity of 140 hp. (135 hp combined with all-wheel drive). Diesel versions offer a 2.2-liter engine in 91 hp output options. and 88 hp (with 4WD). All models were equipped with either a 5-speed manual or 4-speed automatic transmission.  The suspension remained unchanged. Independent, spring, MacPherson type front and rear. Still, some models were equipped with 4WS (4 Wheel Steering), which provides maneuvering the car with all four wheels. The layout of the brake system has not changed - in front of all the machines there are ventilated disc brakes, behind the drum or disc, depending on the engine. Dimensional indicators of Toyota Camry are optimal both in terms of spaciousness (interior dimensions - 1990 x 1450 x 1175 mm) and dimensions: the length of the car is 4625 mm, the width and height are 1695 and 1410 mm. The wheelbase is 2650 mm, the minimum turning radius is 5.4 m. The deep trunk has a decent volume, which can be further increased by a folding rear seat.

After restyling in 1996, all versions of the Toyota Camry V40 are equipped as standard with two front airbags (for driver and passenger), anti-lock braking system. Since the model was released in 1994, the TRC system was available as an option for individual trim levels. High passive safety is confirmed by successful results in crash tests.

Toyota Camry V40 is an excellent representative of the Japanese automobile industry of the 90s, which has incorporated all the best practices of Toyota. But the production of the model and its restyling (by the way, very insignificant) fell during the collapse of the “soap bubble” in the economy, so the company was forced to cut costs. The line of complete sets does not offer such a separation between simple and chic versions, as was typical for previous series. External and internal equipment has become more practical. Nevertheless, a high level of comfort, the quality of finishing materials, and good equipment remain decisive for this model. Owners of Toyota Camry of this generation do not have special problems with spare parts and service.