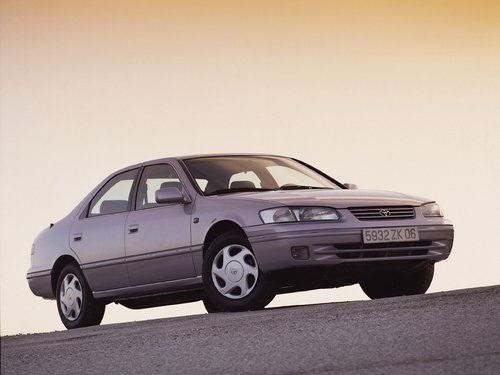 Electrics
Sedan
The Camry XV20, which appeared in 1996, was an evolutionary development of the model of the previous (XV10) generation. The car slightly increased in size, acquired a more wedge-shaped silhouette and a "slanting" front optics. An increase in the wheelbase by 50 mm made it possible to make the rear row more spacious, with the change of generations more steel and height / width of the passenger compartment. In addition to the interesting price and configuration, the model’s popularity growth (for example, in the United States in 1997, Camry became the absolute market leader) was not least influenced by the high driving characteristics provided by an independent suspension and subframes that are connected to the body through elastic supports to reduce vibration . The ability of the Camry suspension to “swallow” road irregularities was also appreciated by buyers in Russia, where a steady sales growth was indicated. For the Russian market, the Camry XV20 sedan was equipped with gasoline engines: a 2.2-liter “four” (131 hp) and a 3.0-liter unit V6 1MZ-FE (190 hp).
The interior design of the 1997 Toyota Camry XV20 completely changed, but not far from the cars of the previous series - it looks rustic, even the wood-like inserts and the location of the buttons on the panel look somewhat archaic; all the same plenty of plastic, but here it is of impeccable quality, the panels are perfectly fitted, and the level of noise insulation of the cabin does not cause complaints. It is very convenient to get behind the wheel (the column is adjustable, there is an adjustment of the lumbar support), there is enough space for the rear passengers. Already in the initial configuration with a 2.2-liter engine, Toyota Camry will offer front fog lights, heated electric mirrors, remote control of the central lock, power windows, a folding rear seat (60/40), climate control. The more expensive SX equipment with a 3.0-liter engine adds an electric front seats to this set, and in the top version of the DX - a leather-wrapped steering wheel, a leather interior and other equipment.

The base 4-cylinder 16-valve petrol engine 5S-FE delivers a maximum power of 131 hp (at 5200 rpm), the torque reaches a peak of 196 Nm (at 4200 rpm). Gasoline consumption (AI-92) with a 5-speed manual gearbox was declared by the manufacturer to be 6.9 liters on the highway and 12.2 liters in the city cycle; with automatic 4-band transmission - 7.4 and 13.5 liters. As a top-end, a 3.0-liter V6 1MZ-FE engine was installed on the Camry XV20. Compared to the previous 3VZ-FE, it has better power (190 hp vs 188) and traction (273 Nm vs 256), while maximum performance is achieved with a lower number of revolutions. This engine is connected to an automatic 4-band gearbox; gasoline consumption (AI-95) is 8.3 / 15 liters per 100 km (highway / city).  The Camry XV20 suspension is completely independent - it retained the design scheme from previous Camry generations: front and rear suspension struts of the MacPherson type. The suspension is simple, maintainable and gives the car quite high driving characteristics. The sedan is equipped with power steering. Front ventilated disc brakes, rear disc brakes. The car was equipped with tires 205/65 R15. If we talk about the dimensions of the model, then they are 4765 x 1785 x 1430 mm (L x W x H). Thus, the increase compared to the previous model was 40 mm in length, 15 mm in width and the same in height. The wheelbase now has a size of 2670 mm. The turning radius slightly increased - from 5.3 to 5.6 m. The mass of the car is 1385-1445 kg, the maximum load capacity is 475 kg. The luggage compartment has a volume of 520 liters, and the back of the rear sofa folds in parts to transport long items.  In the list of Toyota Camry XV20 safety systems, there are standard two airbags (driver and front passenger). The car has seat belts with load limiters, active head restraints, anti-lock brakes. Confirming the overall high level of safety, the Camry XV20 sedan received good marks in the NHTSA and IIHS crash tests.

The high build quality allowed Toyota Camry to earn a reputation as a reliable and almost trouble-free car, which is very important for used cars. The 5S-FE motor has a simple design, like all units of the S series. The reviews on the 1MZ-FE engine are more contradictory, but this engine is considered quite reliable, but it should be borne in mind that it works in intense thermal conditions and is extremely demanding on the state of the cooling system , but with proper maintenance, its resource is quite capable of exceeding 500 thousand km. In addition to a high level of comfort, excellent driving performance, it is worth noting the high liquidity of the Camry for sale.