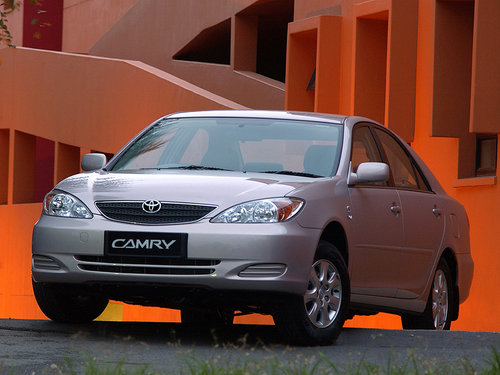 Electrics
Sedan
The growing popularity of the front-wheel drive Toyota Camry sedan contributed to the fact that the car began to grow in size. Indeed, in North America, which is the main market for this car, the average adult height is 190 cm. Unlike the rather squat model of the previous generation, the new Camry became almost 70 mm higher and the wheelbase increased by 5 cm. Thanks to the design, the drag coefficient decreased to 0.28. Over the years of its existence, Camry has consistently demonstrated high class, which, of course, corresponds to the internal content: a spacious chic interior has long been a hallmark of the model. Given the growing demand for minivans and crossovers, it was decided to abandon the station wagon, whose share in the production of the previous generation was quite significant. For each market, Toyota Camry had its own differences. In Japan, in particular, the car was offered with only one engine, but there were four-wheel drive versions. A set of trim levels also can not be called modest. Even in the simplest “2.4 G” in the equipment there are those options that distinguish a high-class car: for example, electric front seats, remote control key. What can we say about richer trim levels with a leather interior, sunroof, cruise control, navigation system and a host of other options. Modifications of Touring with a sports accent in the design differ in the grille, optics and the presence of a rear spoiler.

As already mentioned, in Japan there was only one engine on the Toyota Camry: a 2AZ-FE, 2.4-liter, with a variable valve timing system and a power of 156 hp. This motor is a representative of a new generation, which replaced the popular S series on the conveyor. Its characteristics determine the good thrust-weight ratio of the Camry. One can, however, note one specific problem inherent in the AZ series motors of the first generation (until 2004), which owners sometimes encounter: the slightest overheating leads to the pulling out of the cylinder head bolts, which over time can lead to more serious consequences.

MacPherson strut front and rear suspension - this type of design remains unchanged for Toyota Camry for generations. The width of the new base allowed to increase the length of the axles, which was reflected in better stability. Toyota Camry has excellent handling, a decent response in the corners, which allows the driver to completely "feel" the car. The V-Flex Fulltime 4WD all-wheel drive system reflects recent trends - the front axle remains the leading one, while the rear axle is connected using a viscous coupling. A number of technical solutions implemented in Toyota Camry allow us to classify this car as one of the safest cars in the world of its time. Disc brakes front and rear provide confident braking. The anti-lock braking system is supplemented by the function of distributing the braking force on the wheels, and the auxiliary braking system further enhances the efficiency during emergency braking. Since 2004, changes have been made in the design of the car to improve the protection of the driver and passengers during a side impact, which allowed the car to earn high marks on the results of crash tests. In addition to frontal and side airbags, the car can be equipped with side curtains.

Toyota Camry is one of the cars that show the optimal balance of performance. Partly for this reason, and also due to the high quality of production, second-hand copies slowly fall in price. Buyers are attracted by a powerful engine, reliable comfortable suspension, as well as the prestige of the model, its attractive modern design. An important plus is the absence of problems with spare parts and maintenance.