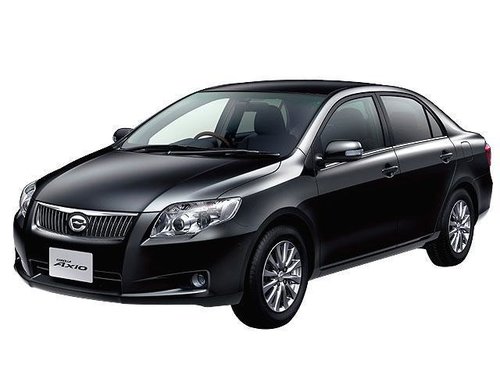 Electrics
Sedan
The jubilee tenth generation of the Corolla sedan got its own name in Japan: Corolla Axio. This demonstrates the division into two lines: for foreign markets and for domestic, where a much more generous variety of modifications and configurations is traditionally offered. The release of this car is dedicated to the 40th anniversary of the model. In the new generation, the car is distinguished by high-quality materials and a carefully calibrated exterior design, due to which the aerodynamic drag coefficient is 0.29. As for the interior, here everything is no less polished, quite recognizable and even to some extent conservative, but at the same time self-sufficient. The name of the car is derived from the modified Greek word "axia", which means "value." This emphasizes that the model is intended primarily for those who remain a constant fan of the Corolla family. Together with the station wagon Corolla Fielder, aimed at younger and more active people, Axio forms a wide range. Corolla Axio offers complete sets X and G with one and a half liter engines and "Luxel" with a 1.8-liter engine. The basic version has a steering column with adjustable in two planes, air conditioning with manual control, CD player, and as options - front and rear "fog", a leather braid on the steering wheel. A very wide trunk opening facilitates loading, and it itself has a decent volume of 459 liters. If the standard is the presence of 4 speakers for the 1.5-liter versions, then 6 speakers are offered for the 1.8L models. Navigation system with HDD and 6.5-inch monitor - manufacturer's option. The rear armrest is the standard for all trim levels except X. The car is equipped with xenon headlights, a spoiler, decorative wood-like panels, soft suede upholstery and the rear seatbacks can fold down (6: 4), allowing long items to be transported. In 2008, the grille, front and rear lights were redesigned. New in the interior - steering wheel trim "wood." A model with a 1.8-liter engine is now equipped with a heated driver's seat in the shoulder, lumbar and femoral zones. In addition to the basic configuration, a corporate version appeared - 1.5 X Business Package with a 5.8-inch rear LCD. Modification “G” received additional turn signal bulbs built into the rear-view mirrors. The cars were equipped with two engine types: the already familiar 1.5-liter (105-110 hp) and the new 1.8-liter (125-136 hp depending on version) with the Dual VVT-i control system valve timing. Transmission - CVT Super CVT-i. In the version with a 1.5-liter engine, a 5-speed manual is also available. In the 1.8-liter version, the transmission is equipped with a Sports Sequential Shift system, allowing the driver to enjoy manual gear shifting. In 2009-2010, the engine and transmission settings were revised. As a result, more efficient fuel consumption. The model with a 1.8-liter engine is equipped with a new generation Valvematic gas distribution mechanism, which reduces the environmental impact. Combined with the Super CVT-i transmission, Valvematic further improves fuel economy. The power also increased - up to 133-144 liters. with.

Corolla Axio front suspension - independent, suspension struts. The rear one is an independent double-lever for all-wheel drive modifications and semi-dependent on the torsion beam for front-wheel drive. All-wheel drive system - V-Flex with a viscous coupling rear axle. Compared with the previous generation Corolla, the wheelbase remains the same. The Axio sedan differs from the international version of the new generation primarily in its dimensions - it is 150 mm shorter and 65 mm narrower, so this car belongs to the group of cars with a body of the 5th size in the domestic market. This desire to maintain compactness is justified not only by considerations of the convenience of urban operation, but also quite logically leads to better thrust-weight ratio (less weight - more power) and economy.

For many connoisseurs of right-hand drive cars, the Corolla Axio is an excellent reason to transfer to a more recent Corolla without changing the position of the steering wheel. In addition, Axio is a great example of the difference between export versions and what the manufacturer considers necessary for the domestic market, which is largely welcomed with a bang by our consumers of used Japanese cars. This sedan is represented mainly by one and a half liter versions, and as for cars with an engine of 1.8 liters, which are able to please the maximum equipment, interest in them is higher and, as a rule, they do not stagnate for sale for a long time.