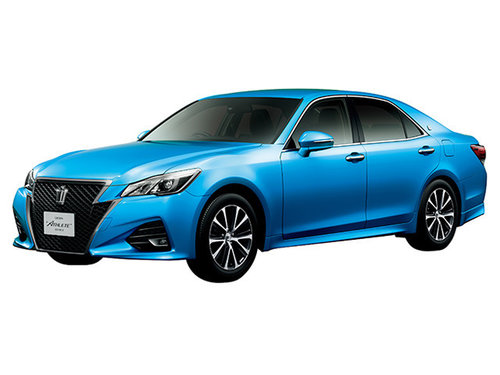 Electrics
Sedan
In December 2012, it was launched in the fourteenth generation Toyota Crown series. Even with the ultramodern design alone, it can be affirmed that this is truly a “royal” car worthy of wearing a crown emblem on the radiator grill. Toyota Crown - the flagship of the company and the car, the name of which has been associated for almost six decades with the highest level of comfort and quality of production. The new generation of Crown, built on the S210 platform, has become the largest in the history of the model. The wheelbase is now 2.85 m, which is 7 cm more than the previous generation Crown.
For several generations (starting from the eleventh), the car is available in two versions - the chic Royal and sports Athlete - with some differences in design, suspension settings and trim levels. The interior of the Crown Royal is built on the principle of “in harmony with contrast”: various colors of panels, seat upholstery details, a three-layer front panel create a feeling of airiness and at the same time depth, visually freeing up additional space. Crown Athlete colors tend to darker and less contrasting tones. For most trim levels, an automatically steering wheel and a driver's seat are provided for easy boarding and disembarking; electric drive, ventilation and heated front seats. The Crown Royal also has electric power and heated rear seats. In the same chic version, there is a dual air conditioning and a rear center armrest with a built-in air conditioning control panel and audio system.

Toyota Crown has three types of engines. For Crown Royal, it's a 2.5 liter engine. The base gasoline 4GR-FSE with direct injection and a power of 203 hp, as well as a hybrid power plant, based on the 2AR-FSE engine. Power is not so great - 178 hp, but at the same time a strikingly low fuel consumption - only 4.3 liters per “hundred”. If you translate it into kilometers per liters, it turns out that the hybrid Crown is able to travel 23.2 km per liter, while with a conventional gasoline engine - 11.4 kilometers. These same engines are placed on the Crown Athlete, and in addition to them, there is also a 3.5-liter 2GR-FSE with a capacity of 315 hp.

Toyota Crown Suspension is independent. Double wishbone in front and multi-link rear suspension. Having heard a little in size, the car at the same time acquired a lower center of gravity, which improved stability. The Crown Athlete uses an adaptive suspension infinitely variable adjustment system: it provides high maneuverability and directional stability, while maintaining a high level of ride comfort in dynamic situations in various situations. “Automata” of gasoline versions are equipped with a built-in controller for driving and acceleration control DRAMS, which adapts to the actions of the driver. Crown with conventional motors are equipped with automatic transmissions. For a 2.5-liter engine, this is a 6-speed automatic transmission (rear-wheel drive or full). For 2GR-FSE - 8-speed. Hybrid Crown equipped with a variator.

This generation has several default preventative protection systems on all trim levels: these are the stability control (VSC) and traction control (TRC) systems; brake force distribution (EBD) as an addition to ABS; traction control system (TCS). As options: an intelligent headlight control system; radar cruise control, providing not only constant speed control, but also acceleration and braking control depending on the traffic situation. Toyota Crown earned the highest JNCAP ratings for its high level of collision protection. In particular, the driver and passengers are protected by seven (Crown Athlete) or nine (Crown Royal) airbags, as well as active head restraints.